The Murder of Gao Rongrong (Photo)

Gao Rongrong is known to many as the innocent woman whose face was disfigured with electric batons by the Chinese police simply because she persisted in her belief. She may have died in silence, but now an increasing number of people who are learning about her death are becoming interested in Falun Gong and concerned about the genocidal persecution in China.

Although the precise details of her death are lacking due to the brutal persecution, the CCP's severe information blockade and the fact that many practitioners who were involved in her recent rescue effort were arrested and are undergoing persecution, some people have reached the clear conclusion that Gao Rongrong was murdered under orders from the 610 Office. The detailed information about the direct cause of her death, her second arrest, and the tortures she suffered after the arrest are all incomplete, but certain documents for this case have been secretly delivered abroad through civil channels, which has made the overall picture of this murder clear.

In October 2004, Gao Rongrong successfully escaped from under the guard's noses and she publicized to the world her facial disfigurement from electric shock baton torture. After that, the 610 Office treated her as a mortal enemy. Luo Gan, the head of the central 610 Office, personally arranged retaliation against her, claiming, "This incident has caused too much of a stir in the international community." He ordered his subordinates to "take good care of her case." The Ministry of Public Security listed her escape as Top Priority Case No. 26. A Special Case Group was established at the Shenyang City State Security Bureau, and the Shenyang City Judicial Bureau issued a "Notice for Assistance in Investigation."

"Take good care of her case" is a euphemism for an execution order. According to witnesses, Gao Rongrong was sent to the Masanjia Forced Labor Camp after she was abducted for the second time on March 6, 2005. She was held there until June 6, 2005, when she was sent for emergency treatment to the No. 1 Hospital affiliated with the China Medical University in Shenyang City.

It is unknown what she went through at the labor camp during those three months that resulted in her being near-death. Many Dafa practitioners who were involved in her escape and rescue were also abducted and tortured.

Gao Rongrong's parents went to the Masanjia Forced Labor Camp numerous times and asked to meet with their daughter. Su Jing, one of the heads of the labor camp, lied and said Gao Rongrong wasn't there, and that the government was investigating her case and even she could not see Gao Rongrong. Later she changed her story and said, "Gao Rongrong is here and she is eating well. She is doing great!" Wang, another head of the labor camp said to Ms. Gao's parents on the fourth day of her emergency hospitalization, "We never wanted to accept her to begin with. Those 'higher ups' forced us to take her. It is up to them to decide whether you are allowed to visit her or if she is to be released."

The 610 Office intentionally blocked access to Gao Rongrong and made her disappear from public view. Authorities at the Zhangshi Forced Labor Camp, the Masanjia Forced Labor Camp, the Judicial Department in Liaoning Province, the Liaoning Province Labor Re-education Bureau and persons from the Luxun Institute of Fine Arts Institute told the same story about Gao Rongrong. Not a single person dared to reveal her whereabouts or any facts about her.

An insidious murder was purposely covered up. In a dark environment, Gao Rongrong most likely suffered tortures unimaginable to people living in a peaceful environment. During the process, her health reached a critical state.

The Emergency Room doctor who treated Gao Rongrong said, "She was in critical condition when she was brought here."

Did the 610 Office agents allow any real medical treatment to be administered to Gao Rongrong during her ten-day hospitalization between June 6 and June 16? 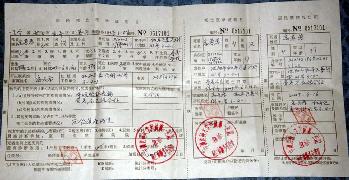 One of Gao Rongrong's relatives with some medical knowledge immediately pointed out that Gao Rongrong did not receive enough nutritional supplements and those that were administered were not appropriate for her condition. He concluded that Gao Rongrong suffered systemic failure of bodily functions caused by long-term malnutrition (starved to death).

According to witnesses, the hospital did not in any way provide the necessary treatments for Gao Rongrong and did not even give her any food. The fact that a hospital does not make the effort to treat a critically ill patient leads one to suspect that the hospital was also following "special orders" from the higher-ups or was otherwise under great pressure. Then, who else but Luo Gan and its 610 Office have the authority to give such orders?

Around 9:00 a.m. on June 12, after having received a notice, Gao Rongrong's parents rushed to the hospital. They saw Gao Rongrong was at death's door after being diagnosed with systemic failure. She had a very weak pulse. She was hooked up to an oxygen tank and was skin and bones. She was totally unconscious and did not react to outside stimuli. The scars on her face the electric shocking had caused were still deep and shocking.

Even under such a severe condition, around 20 people were still observing Gao Rongrong. They asked the doctor many times, even in the presence of Gao Rongrong's mother, "When is she going to die?"

According to the doctor, his medical instruments revealed brain abnormalities. The doctor suspected the cause to be injection(s) of system-damaging drugs.

Gao Rongrong's family asked for Gao Rongrong's medical records and profile during the period she arrived from the Masanjia Labor Camp up to the present, but their request was rudely denied. What do those documents contain that must remain hidden?

Surprisingly, several days before Gao Rongrong passed away, the police had started telling people in the local area that she "has committed suicide through a hunger strike." 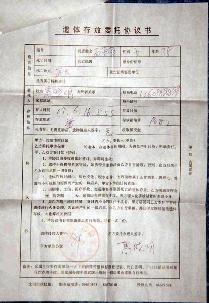 After Gao Rongrong died, the 610 Office and the police forbade her family from seeing her body and forced them to agree to let the police monitor and control her body. They even tried to snatch receipts for the "Agreement on Body Placement" and the "Notice on Body Entering/Exiting the Freezer," so that they could cremate her body at the Shenyang City Mortuary unchallenged. In addition to the many spies hovering around Gao Rongrong's family home, the police also installed monitoring devices around their home, and dispatched plainclothes police officers around the mortuary and the places around their home such as department stores and the market. They also isolated Gao Rongrong's family and conducted strict interrogation. Their fear of punishment and their intent to shirk responsibility for Gao Rongrong's murder is clear as day.