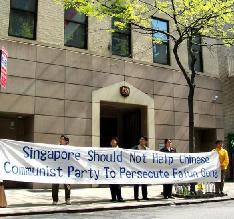 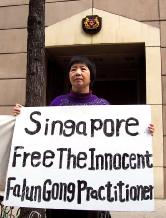 The Chinese Communist Party (CCP) Persecutes Falun Gong and Will Be Punished by Heaven's Principles; the Singapore Government Is Advised not to Act as Accomplice to the CCP

It was reported that two Falun Gong practitioners, Ms. Ng Chye Huay and Ms. Cheng Lujin, were charged by the police in May 2004. Each of them faced eight charges, including, "Assembly without a permit" and "Possessing and mailing out uncertified VCDs." After almost one year of hearings, the two practitioners were fined S$20,000 and S$24,000 respectively on April 27, 2005 by the Singapore Court. They refused to accept the verdict and expressed their wish to appeal. They were taken to the Changi Women's Prison at 6:00 p.m. with the possibility of being imprisoned for up to 24 weeks.

Ms. Yi said that Falun Gong has spread to more than 60 countries and only the CCP is persecuting Falun Gong. The CCP conducts brutal persecution of practitioners who follow the principles of Truth, Compassion and Forbearance, and will be punished by heaven's principles.

Ms. Yi said that the Epoch Times published the "Nine Commentary on the CCP" that disclosed the CCP's evil nature. Over one million people have renounced membership in the CCP after learning the facts, and the CCP will soon meets its demise. If the Singapore government helps the CCP, the consequences will not be good for Singapore and its people.

Falun Gong Spreads Worldwide, the Government of Singapore Commits Wrongdoing and Is Urged to Correct Its Mistake

Practitioner Ms. Qingqing Liu from Australia said, "I was surprised to hear of the news. This is the first case in which another government persecutes Falun Gong. Since 1999, practitioners worldwide have clarified the truth and won support from people and governments around the world. Falun Gong has won more than one thousand awards for its positive influence in society."

Practitioner Ms. Xiangshu Li from Japan said, "I have been to many countries to participate in truth clarification activities. Every time, the local police help to maintain order. They are friendly and support us. Therefore, the Singapore incident is inconceivable and appalling. We come here to appeal because the Singapore Government's office is here. We wish to have them know the facts and correct their mistake."

New York Police Officer: "We know about Falun Gong and the persecution. You [Falun Gong Practitioners] always do a good job."

A little after the practitioners started their appeal, a police officer came over to check the situation. He came forward to tell us his purpose. The officer said, "I received several calls saying there was an appeal here, so I came by to check. If I had known it was Falun Gong's appeal, I would not have come."

He said that the practitioners' appeal at the Singapore Consulate does not need a permit and is legal. He said, "I know about you and the persecution. You always do very well."