Six years ago on April 25, ten thousand Falun Gong practitioners peacefully appealed at the Appeals Office of the State Department of China, hoping the government would correct their wrong decisions and ensure Falun Gong practitioners the cultivation environment they are entitled to by law. However, the Chinese Communist Party (CCP), headed by Jiang Zemin, launched a large-scale persecution of Falun Gong against the people's will and the law. Today, news from China indicates that the CCP is carrying out the most intense persecution against Falun Gong since July 20, 1999, when the persecution began. 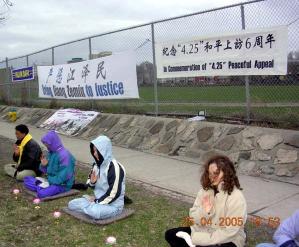 Mr. Lei, one of the organizers of the activity, said that the April 25 appeal was the most peaceful and rational spontaneous appeal by the Chinese people since the CCP came into power. It is their belief in "Truthfulness-Compassion-Forbearance" that has forged the practitioners' tenacity, rationality, and peacefulness in support of ending the violent and senseless persecution. However, the CCP has treated the people's peaceful call as a pretext for nation-wide suppression.

According to statistics from the Minghui website, as of April 25, 2005, 1,890 Falun Gong practitioners are verified to have died from torture and other forms of persecution. Mr. Lei said that practitioners spread to the world the facts about Falun Gong, but instead of bringing the persecution to an end, the CCP has escalated its insane persecution.

Mr. Lei said that news received from China on April 22 indicates that the CCP has begun new rounds of arrests nationwide. It was confirmed that arrests and home-searches took place recently in Shandong, Liaoning, Tianjin, Sichuan, Guangdong, and Hubei provinces. Research indicates that the wide spread of the "Nine Commentaries on the Communist Party" brought a tide of withdrawals from the CCP. The CCP's fear of justice is showing its weaknesses and a causing a serious survival crisis.