(Clearwisdom.net) On April 18 2005, the five-day "Uncompromising Spirit" art exhibition opened its doors to the public. More than 50 guests and visitors, including linguist and campaigner for liberty Michael Darby, renowned jurist Yuan Hongbin, a faculty member from the University of Sydney and Australian Chinese Artist Zhang Cuiying attended the opening ceremony. 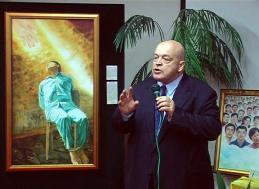 During his opening remarks, Mr. Darby called on Prime Minister Howard to look at the evil nature of the Chinese Communist Party (CCP) rather than its surface. He said that he not only saw the talent and courage from these paintings but also saw the

uncompromising spirit. He introduced one painting to the audience, which depicted how an Australian's husband was tortured to death for practicing Falun Gong. He said that such tragedies are happening every day. Torture, abduction, murder, brainwashing and other atrocities are rampant under the reign of the CCP. However, through these courageous artists' efforts as well as support from kind-hearted people, he believes that this situation will change, and China will become a democratic and prosperous nation. 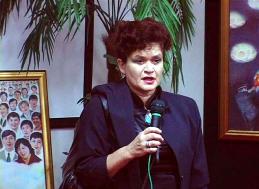 A faculty member at the University of Sydney

A faculty member at the University of Sydney also attended the opening ceremony. She said that freedom of belief, expression and association should have been included as conditions for China to join the WTO and host the 2008 Olympics. She said that the Chinese government was granted the right to host the 2008 Olympics, but these basic rights were not included for consideration. The western world shouldn't sacrifice or downplay human rights for trade and money. She called on the Australian government to end trade with China until this tragedy is brought before an international court. She also encouraged practitioners to hold more exhibitions of this kind to let more people in the West know of this human rights atrocity and to stop the persecution in China. 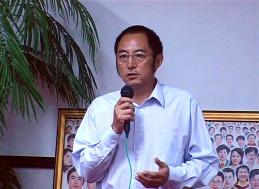 Professor Yuan Hongbin said that under the totalitarian system of the CCP and the tight media censorship, all artists of any discipline have to support the CCP in order to survive. Freedom is the source of true art, and no true art can prosper where freedom is suppressed. From this understanding, he believed that the arts in China died a long time ago. Yuan said: "These artworks depict the struggle between tyranny and the free spirit. From these bitter sufferings, the artists successfully show us the beauty of art. While the CCP has been boasting that China is in its best time in terms of human rights, these artworks open a crack in the mask of the CCP's tyranny. Through this crack, you can see the true situation in China and the ongoing human rights catastrophe." Professor Yuan hoped that people could sense the immortal human spirit from these artworks.

During the ceremony, practitioner Jane Dai and her daughter Fadu both spoke out to testify to the brutal persecution of practitioners.

This exhibition attracted many students, especially Chinese international students. One student said: "In China, the government always lies to us, all media are owned by the CCP, and they have been spreading propaganda to turn public opinion against Falun Gong. We don't know anything about what the government has been doing under the table. We have only learned the truth of the persecution from this exhibition, fliers we received on streets and some local news reports. As we have learned about the truth, we won't just listen to the propaganda any more. I feel that this exhibition is very shocking."

Another Chinese international student said: "From what I have learned in China, Falun Gong has always been depicted to be very bad. However, if what is shown by the paintings is true, the persecution is too brutal."

Many students said that they would bring their classmates so that they can learn the truth about Faun Gong.