On March 4, 2002, the police assigned to the 610 Office in the Jilin City Police Department arrested Jilin City practitioner Guo Qiyuan. While handcuffed, he "fell" from the sixth floor of the police department building and died. Below is the current situation of his orphan Guo Xingcan.

[Editor's note: The child's caretaking family and contact information are on file, but are withheld to avoid endangering the family.] 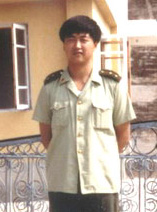 Mr. Guo was born in July 1969. He was an officer in the military at the assistant battalion commander level. At one time he served as a border control office commander in Jian City and was also once an acting head of a police station. He began to practice Falun Gong in 1996, and later left the military to return to Jilin City.

Mr. Guo was sent to a forced labor camp for a year because he went to Beijing to appeal for the right to practice Falun Gong. He was detained in the Huanxiling Labor Camp in Jilin City. In April 2002, the police ordered Mr. Guo and other steadfast practitioners to attend a brainwashing session, where they were prohibited from communicating with each other. Every day they were deprived of sleep, severely beaten and subjected to other forms of torture. After prolonged persecution and torture, Mr. Guo succumbed and wrote letters that denounced Falun Gong. When he realized what he had done and tried to retract his statements, the police rejected his request and intensified the persecution by giving him a harder workload and increasing the pace of his daily schedule. They also added more forced brainwashing. They searched the practitioners every few days, taking away any pens or paper that they found. They prohibited the steadfast practitioners from talking to each other. Daily activities were limited to work, sitting on the bench, torture, and brainwashing. Mr. Guo was always under heavy stress. Finally, the labor camp forged the three statements, promising to give up the practice of Falun Gong, in Guo's name. Then they released him. Although Mr. Guo was under great pressure, after his release he insisted on practicing Falun Dafa. His wife, succumbing to the pressure, was forced to divorce him. After the divorce, she lived alone in Jian City with their daughter. To help more people know the facts about Falun Gong, Mr. Guo helped by working in a Dafa materials production center.

Right after New Year's Day in 2002, the Jilin City authorities formed a "command center." It was led by the police chief Liu Xingyuan, with deputy chief Di Jiexin serving as the director of the special team and the "610 Office" director Han Ming and technical investigation team captain Fu Hongjiu as assistant directors. The police divided the practitioners into various categories to monitor them throughout the day. The "610 Office" also secretly tailed and spied on targeted practitioners.

In March 2002, under the direction and command of the Deputy Party Secretary of Jilin City Zuo Ronglian, the political and judicial committee secretary Chen Fu, and city propaganda department director Xu Han, the special team summoned over 200 policemen. Along with the police chief Liu Xingyuan and deputy chief Di Jiexing, they broke into ten materials production centers and arrested 15 practitioners. They confiscated computers, color printers, copiers, template makers, and other equipment totaling over 200,000 Yuan in value, 150,000 sets of truth-clarifying materials and a large amount of stationery and tools.

On March 4, 2002, four or five members of the "610 Office" who had been spying on them arrested Mr. Guo (who previously used the fictitious name Guo Qiang) and another female practitioner, Liu Yujie, and took them to the Jilin City Police Department.

The police locked Guo in a room on the sixth floor, cuffed his hands to the heating pipe and wrapped a pair of old pants around his head. The next day, with handcuffs on, Mr. Guo allegedly tried to escape from the room by going out the sixth floor window, but fell and died.

The police department tried in every way to block the news and conceal the information from Mr. Guo's family members. They were afraid to let the public know what had happened, and waited until the last moment before cremation to inform the family. When the family arrived, the police encircled them until the end of the cremation and only freed them afterwards. During the cremation, many policemen blocked the area.

Thus Mr. Guo left us, a young life so easily ended. A once happy family was destroyed.