The Most Precious Gift on Winter Vacation (Part I) (Photos)

The short winter vacation is now over. Since I began practicing Falun Gong, "Truthfulness-Compassion-Forbearance" has guided the children in each of my classes, helping them to grow and develop. From their positive changes, I see that this precious gift has brought great benefits to the children, so I wholeheartedly provided the children from Minghui School with instructions for Fa study and exercise classes during the winter vacation. Monday to Friday, one class went from 9 to 11a.m. and the other was from 1 to 3 p.m. The afternoon course was followed by practicing at the local practice site from 3 to 5:30 p.m.

During the ten-day courses that took place over two consecutive weeks, the children became more and more serious, and the attendance rate constantly increased. The children very much enjoyed the classes at Zhuangjing Primary School. The duration for practicing the second set of the exercises was gradually extended. Children also practiced with their eyes closed. When doing the fifth exercise, they would diligently try to sit in the full lotus position. It was really amazing!

While studying the Fa, for the children who did not know many words, we would point at those words one by one, so they could gradually catch up. Especially after returning home, these children would study the Fa by themselves, making their parents so pleased. We studied Zhuan Falun, Hong Yin, Hong Yin II, and Essentials for Further Advancement every day even though it was at a slow speed. After Fa study, we would play waist drums and finally we would enjoy the time for games, entertain ourselves with snacks prepared by the parents, and then reluctantly, we would return home. 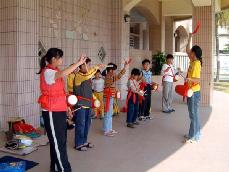 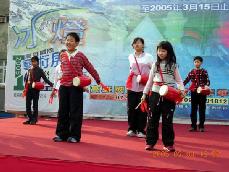 The last day, we held an outdoor class. We went to visit an Ice Sculpture Exhibit, watch a Three-D movie, and visited a food exhibit. We gave out many hand-made paper lotus flowers and many Falun Gong truth-clarifying materials, performed the five sets of Falun Gong exercises and played the waist drum on the stage. 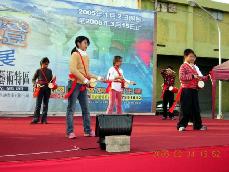 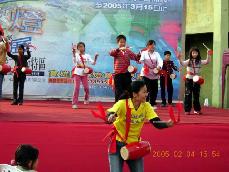 When the ten-day classes concluded, I felt quite reluctant to see all the children off. The activities provided these young practitioners and their parents with a cultivation environment to improve themselves as a whole. Though taking part in this program, I have also understood many Fa principles and let go of many attachments.