Explanation: Photos 1-2 were taken in January 1, 1999 at Laixi City's Stadium in Shandong Province. Laixi is a small city, but the group practice of thousands of people was so spectacular that many people were attracted to watch and many more began to learn the exercises on the spot.

Time and place the photo taken: August 1998, in Laixi City

Explanation: In August 1998, more than four to five thousand people successfully held a Falun Dafa Fa-study Experience Sharing Conference at Laixi City's Gymnasium in Shandong Province. Practitioners who attended came from cities such as Qingdao, Weifang, Jimo, Pingdu, Laiyang, Xixia, Haiyang and other places in the province. The whole gymnasium was fully occupied, and many people even sat on the floor. Many others had to stand at the entrance to listen to the experience sharing. A peaceful and benevolent atmosphere permeated the whole gymnasium. 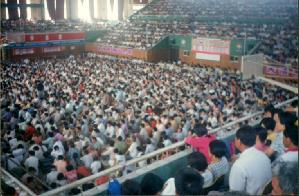