Circumstances Surrounding the Death of Pan Xingfu, and the Persecution of His Wife, Mother, and Five Year Old Son (Photos)

As of January 31, 2005, a five-year-old boy named Zhuangzhuang would never see his father again. His father, Mr. Pan Xingfu, was persecuted to death for his beliefs. He was the former deputy director of the Telecommunications Exchange Center in Shuangyashan City and also deputy director for the Telecommunications Bureau in Youyi County, Heilongjiang Province. Mr. Pan gave his life for his firm belief in Falun Dafa, "Truthfulness-Compassion- Forbearance" when he was only 31 years old. Zhuangzhuang's mother, Ms. Zhang Li, was illegally sentenced to nine years in prison in January 2003 and is now locked up in the Harbin City Women's Prison, in total violation of the Chinese constitution.
Photo of Mr. Pan Xingfu, Dafa practitioner from Shuangyashan City, Heilongjiang Province

His father died on January 31, 2005. His mother was illegally locked up in Harbin City Women's Prison, for a term of 9 years.

On July 8, 2004, Mudanjiang City Jail authorities, in order to avoid responsibility, took Mr. Pan Xingfu to Shuanyashan City's Infectious Diseases Hospital. By then he weighed a mere 40 kg (approximately 86 lbs) and was suffering from severe illnesses. On July 20 Mr. Pan was taken home. In January 2005, Mr. Pan's illness deteriorated. He became even more emaciated and his abdomen was severely swollen. At 11:00 p.m. January 31, 2005, Mr. Pan Xingfu died, leaving his sixty four-year-old mother, his five-year-old son and his imprisoned wife behind. 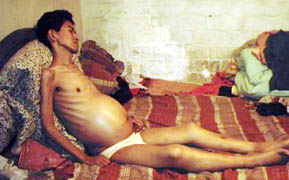 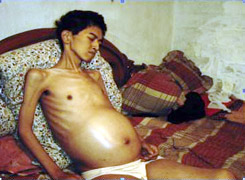 Mr. Pan Xingfu was set free after he was grossly abused and tormented to the brink of death in Mudanjiang City Jail.

Mr. Pan Xingfu was born on February 25, 1974 in Shuangyashan City, Heilongjiang Province. In 1993, he listened to Mr. Li Hongzhi's lectures and exercise teachings in Wuhan. He graduated from the university in 1994 and was assigned to work in the Network Division, Shuangyashang City Post and Telecommunications Office. A job performance review in1995 earned him the title "Advanced Worker." In 1997, he earned the title "Model Worker" for rejuvenating the city through science and education. In 1998, he earned a title of distinction and was named "Trans-century Specialist." On December 12, 1999, Mr. Pan was granted a title of Telecommunications Engineer. In 2000, he became deputy director of the Telecommunications Exchange Center in Shuangyashan City and also deputy director of the Telecommunications Bureau in Youyi County.

Zhuangzhuang's mother, Zhang Li, also a technical specialist, worked at the same place as his father. She once took part in advanced studies abroad.

Zhuangzhuang story: he was born on October 5, 1999. He was lovely. Since Jiang's regime had begun persecuting Dafa, Zhuangzhuang's whole family went to appeal, clarified the truth, validated Dafa and were repeatedly persecuted. Zhuangzhuang was thus indirectly persecuted.

On July 19, 2000, authorities from the Political Security Section in Shuangyashan City Police Department, having received a coded telegram from the Provincial Police Department saying that Mr. Pan had accessed Minghui Net on the Internet, illegally detained Mr. Pan and locked him up in a detention center for over one month.

On December 28, 2000, Mr. Pan and his family members went to Beijing to appeal. In Tiananmen Square, police kicked and struck him, knocking off his glasses drop and bruising his fingers.

Later on, Mr. Pan was locked up in the Tiananmen Square Police Station, the Shahe Labor Camp and then in the Changhe County Police Department Patrol Team. As he was being taken back to the Shuangyashan Police Department, he escaped with the power of his righteous thoughts, but did go back home to avoid further persecution. His mother and his wife, carrying Zhuangzhuang, arrived home. Mr. Pan's mother was then taken away by policeman Wang Xuchun from the Wohongqiao Police Station and held in a detention center. She was released four months later.

In order to continue her Dafa practice and avoid harassment, Mr. Pan's wife left home with ten-month-old Zhuangzhuang. On May 4, 2001, she was unlawfully detained in Baoqing County. Perpetrators were the section chief Han from the Political and Security Section of Baoqing County Police Department and policeman Qiang Gang. In those days, baby Zhuangzhuang had no mother's milk, had no father's care, and couldn't see his grandmother. This lasted for a total of four months.

At 8:00 a.m. on March 7, 2002, the court convened Mr. Pan's case. His wife and three-year-old Zhuangzhuang were blocked from entering the court. Mr. Pan was illegally sentenced to a five-year term.

That same year, Mr. Pan's second oldest brother and his wife were illegally sent to a labor camp.

Mr. Pan Xingfu was detained at four different places during his periods of incarceration. First he was sent to the Shuangyashan Detention Center, then the Qitaihe Forced Labor Camp, then the Suihua Forced Labor Camp and finally to the Mudanjiang Forced Labor Camp. He was compelled to do many odd jobs: feeding pigs, making dough, cleaning floors, etc.

On September 18, 2002, his brother, Pan Xingkun was confined in a small cell and forced to sit on a Tiger Bench, for resisting the evil persecution. Police team leader Hao Liangui and deputy leader Fan Xiaodong ordered inmate Zeng Lingjun to violently beat Pan Xingkun. Right after that, Ji Feng, the labor camp director, told the police to turn up a tape player to the maximum volume to keep Pan Xingkun from sleeping.

In January 2003, Pan Xingfu's wife Zhang Li was illegally sentenced to a nine-year prison term and was sent to Harbin City Women's Prison in April.

One day in June 2004, three years after his detention, Pan Xingfu suddenly fainted and then his health deteriorated. On June 18, 2004, he was sent to the Police Hospital in Mudanjiang City and was hospitalized as a TB in-patient. He was diagnosed as having pleurisy and lung tissue damage. Mr. Pan's body was very weak. He could not even use the toilet on his own. On July 8, 2004, Mudanjiang Prison authorities sent Pan Xingfu to the Shuangyashan City Infectious Diseases Hospital. At that time he weighed only around 40 kg (approximately 86 lbs). Even his 64-year-old mother could carry him on her back. 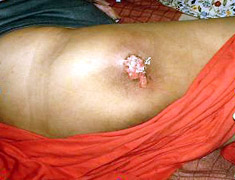 On July 20, 2004, Pan Xingfu was taken home. While at home he ate only a little each day, walked by supporting himself along the wall, and had difficulty breathing during the night. At the end of January 2005, Pan Xingfu's condition suddenly deteriorated. He was losing even more weight and his abdomen swelled up badly. Pan Xingfu died on January 31, 2005 at 11:00 p.m., leaving his deeply beloved mother, five-year-old son and his imprisoned wife behind.

The responsible organizations and people involved in the persecution of Pan Xingfu:

The responsible organizations and people involved in the persecution of Pan Xingfu's Wife, Zhang Li

The responsible organizations and people involved in the persecution of Pan Xingfu's brother, Pan Xingkun