(Clearwisdom.net) On February 19, 2005, practitioners from Yilan County introduced Falun Dafa during the Lunar New Year Celebration held by the Association of Fujian Provincials and were warmly received by attendees and guests from all walks of life. In recent years, numerous introductory activities have been held in Yilan County, allowing Falun Dafa to gradually reach people from different circles. It happened that several practitioners are also members of the Association of Fujian Provincials, so they utilized the opportunity of the annual gathering to convey the goodness of "Truthfulness, Compassion and Forbearance," and allow the guests to learn more about Falun Dafa.

As members of the association registered, practitioners broadcasted 30-minutes of selected programs from the Taipei Performance of the New Year's Gala sponsored by New Tang Dynasty TV. About 20 practitioners from Yilan County demonstrated the five Falun Gong exercises. Their elegant movements and the peaceful and melodious exercise music were highly praised by the guests. Before the exercise demonstration, the principal of Huideng Middle School, Mr. Hong, who has been practicing Falun Gong for several years, briefly introduced Falun Gong, including its emphasis on xinxing cultivation, its wide spread in more than 60 countries around the world, the physical and spiritual benefits that Falun Gong has brought to over 100 million people, the Jiang faction's persecution of the practice, and the lawsuits filed in many countries against Jiang, the chief perpetrator. Mr. Hong especially stressed that Falun Gong is based on the principles of Truthfulness, Compassion and Forbearance. The practice helps people to improve their moral standards and their physical health, and it purifies the mind and body. Its remarkable effects and benefits have been recognized and honored and the practice has received more than 1,300 proclamation from different countries around the world.

While watching the exercise demonstration, many people from the audience, either standing or sitting, followed practitioners to learn the movements. After the demonstration, Mr. Hong encouraged the guests to visit local practice sites to learn the exercises or attend a 9-day Falun Gong introductory seminar. When the banquet began, a lot of people were still talking about Falun Gong. The effect was very good. The Yilan City mayor, speaker of the Yilan County Council and council members, as well as other board members of the association and the restaurant staff unanimously praised the exercise demonstration. It made the gathering fresh and new, and added a peaceful and auspicious atmosphere to the meeting hall. 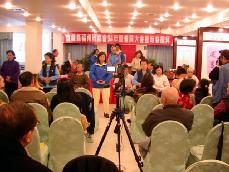 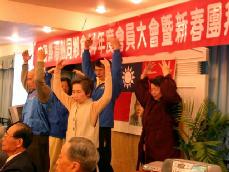