Voice from a Five-Year-Old in Jilin Province: "I Miss My Mommy - I Want my Mommy and Daddy Back!" (Photos)

Parents are abducted and persecuted, and children become orphans. This is happening in China today. Jiang's regime is savagely persecuting many Dafa practitioners, resulting in many families being tragically separated. 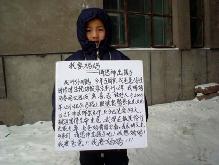 Sun Mingyuan is only five years old. He used to live with his daddy, Sun Qian, and mommy, Ma Chunli. Since both his parents practiced Falun Gong, they were illegally arrested. Mingyuan had to live with his grandma and missed his parents very much. When he heard that his mother was cruelly tortured and in critical condition, the five-year-old wrote his thoughts on a board. He wanted to hold the board and go with grandma to get his mommy back. He titled the board," I Want My Mommy - Please Help." The message read:

"My name is Sun Mingyuan and I am five years old. My daddy was illegally sentenced to 12 years in prison because he practices Falun Gong. Officers from the Dehui Police Station abducted my mommy on the street on December 14, 2004. Now she has been on hunger strike for 48 days and is in critical condition. I am lonely, helpless, and separated from my parents. Kind people, please help me. I miss my mommy. I want my mommy back and I want my daddy back." 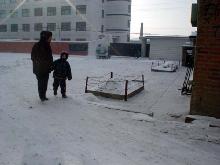 Mingyuan went with his grandma to the detention center many times. They wanted to get his mommy, her daughter, back, but they did not succeed.

Sun Mingyuan's mother, Falun Dafa practitioner Ma Chunli, was abducted on a street on December 14, 2004, and detained. She has been on a hunger strike for 48 days. Now she is weak and in critical condition. Poor little Mingyuan and his grandma went to the detention center several times and asked for her release. The police made excuses and blamed others, and no one would assume responsibility and release her. Faced with this desperate circumstance and to save mommy's life, Mingyuan wrote his thoughts on a board, hoping that kind people would see them and help rescue her.

Sun Mingyuan's daddy, practitioner Sun Qian, was abducted on October 26, 2002. His detention term was extended by over 15 months. On January 15, 2004, the police carried Sun Qian, who was unable to walk as a result of torture, to court. He was illegally sentenced to 12 years in prison. He is now locked up in Jilin Prison.