(Clearwisdom.net) Lammula, a girl from the Philippines, thought that her family was not very rich. She worried a great deal about school and living expenses for her younger brothers and sisters. She felt a lot of pressure and did not have a happy life at all. She decided to go to Taiwan to work as a maid. Because of the language barrier, she could not always understand what her employer's daughter said to her. Sometimes the little girl would get very angry and yell at her. Lammula would also sometimes raise her voice in anger at the little girl.

Lammula often saw her employer practicing the Falun Gong exercises. She thought that the movements and postures of Falun Gong were very elegant and exquisite. After seeing the exercises, she felt so calm that she asked her employer if she would be allowed to learn it. It just so happened that there was a nine-day lecture series in English, so her employer took her to the nine classes.

After going to the nine-day lecture series, Lammula felt that Falun Dafa was a source of happiness and a blessing for her life, but that this was only a part of Falun Dafa's benefits. Reading Zhuan Falun has moderated her disorderly thoughts. "Perhaps cultivation is an extremely long process, but so long as one is truly practicing cultivation, it will be a process of gradually letting go of one's own attachments." She feels that the principles of Falun Dafa are immense and comprehensive, because one is required to think about things with righteous thoughts and learn to cultivate and temper oneself in the cultivation process. In order to become a diligent cultivator, she has to make demands on herself. Regardless of the time, the place, the problems, or the relationships, she has to search inwards and consider others first. In studying the Fa, she strives to diligently and steadily improve. A practitioner will then be able to reach enlightenment. Lammula likes to read the Falun Dafa books very much.

After she started practicing Falun Gong she said, "Gradually, I can temper my own emotions and know that I have to cultivate the 'forbearance' required in Falun Gong. Now when the employer's daughter throws a fit of temper at me, I do not get as angry as I did before. Now I can very patiently ask what she wants. I feel that I am happier than before. Practicing the exercises also helps reduce my fatigue. Now, whenever I feel very tired or my body is sore, I will practice the exercises. I then immediately feel the improvement in my body, and my spirits become much better. Falun Gong has really changed my life!"

Lammula exchanges her cultivation experiences with her employer if she has some questions that she does not understand in her cultivation practice. She also practices the exercises and sends forth righteous thoughts on Sunday mornings. Sometimes, if her employer is unable to get up for sending righteous thoughts in the morning, Lammula urges her to get up. She also sends forth righteous thoughts four times each day. She said, "Because I want to understand Falun Gong more, I will read the Falun Gong books and also participate in group Fa-study in English."

Lammula said that she is very lucky. Her employer is very good to her, and she is also very thankful that her employer introduced her to the practice of Falun Gong. She now often writes letters to her mother in the Philippines, telling her, "Falun Dafa is great!" She also sends introductory information in English to her mother and hopes that her family will study and practice Falun Gong.

Lammula also participates in events to introduce Falun Gong to the public and in giving out truth-clarifying material in Taipei. She also actively clarifies the truth to foreign visitors in Taiwan. Studying and practicing Falun Gong has indeed become a major turning point in her life. 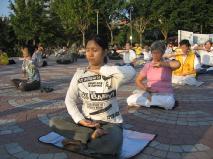 Anti-Torture Exhibition at Da'an Forest Park in November 2004 (Lammula is the first girl with white clothes.)

Before coming to visit Taiwan, an Israeli couple had heard their relatives mention Falun Gong. They were very interested and had tried to find out where they could learn Falun Gong. Because the husband's job required him to travel around the world a lot, it was not easy to fit his schedule to the schedule of a nine-day lecture class. The couple was able to start learning Falun Gong at a nine-day lecture class in Taiwan.

The husband mentioned a very miraculous experience. He said that he had been smoking for more than 20 years. But after becoming aware of the issue of smoking in the lecture class, he felt that the flavor of cigarettes was very bad while smoking at home. He simply could not smoke. Even though he continued to carry cigarettes, after about two weeks, he completely threw them away.

They still have some reservations about sections in the Falun Gong books that are yet to be verified by the scientific world. But because they want to become better and better people and to have a deeper understanding about Falun Gong, they continue to participate in the English group Fa-Study and join the group exercises at a neighboring practice site.

On January 8, 2005, practitioners in Taiwan organized the "Great Wall of Justice" event to appeal to the public for justice and conscience in helping stop the persecution of Falun Gong going on in China. Lammula helped hold some posters in the line. Many visitors asked her, "What is Falun Gong?" In the afternoon, these new practitioners also participated in the "Chinese character formation" and sending New Year's greetings to Teacher. A week later, they had an interesting dialogue at the English group Fa-Study. Lammula said, "I was one of the practitioners forming the Chinese characters!" The Israeli couple was very surprised and asked, "How did you know what to do? Do you have an exercise outfit?! Where can we get outfits like that? We would also like to buy them." Lammula said that her employer had lent her the clothes. The couple told Lammula, "You are really lucky!"

The three of them participated in "Cultivation Experience Sharing of Falun Dafa at Taiwan" as well. Because there was no English translation this time, they did not understand much of the experience sharing, but they said they would continue their cultivation practice.