The family of Dafa practitioner Mr. Yan Li from Jinzhou City, Liaoning Province was notified on December 5, 2005, that Yan Li died under the persecution from the police in Inner Mongolia. The local police offered 5,000 yuan in exchange for the family's silence. Yan Li's wife was at first overwhelmed and confused, and then said, "Yan Li wasn't supposed to die. I won't take it, even if they give me 500,000 yuan, not to mention 5,000 yuan." She is trying to get a lawyer to obtain justice.

Below is the information we have obtained: 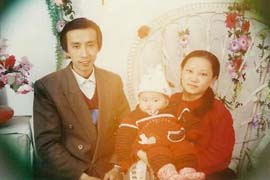 Yan Li, his wife and their child

According to the staff at the Hongshan Detention Center clinic, Yan Li was wearing only a sweatshirt and sweat pants when he was sent to the detention center. It was -21o C (-6o F) in Chifeng City, and the detention center authorities didn't allow Yan Li to bring any additional clothing or bedding.

On November 24, officials from Chifeng City Police Department phoned Yan Li's family and told them to wait for a package. At 10:00 a.m. on December 5, Yan Li's wife Yuan Yingping phoned the Hongshan District National Security after failing to receive the package. A woman told Yuan Yingping that Yan Li was at the brink of death. She urged Yan Li's family to hurry to Chifeng City as soon as possible, "or you will not see him for the last time."

Yuan Yingping took a long distance bus and rushed to the Hongshan District Detention Center in Chifeng City, arriving at 7:00 p.m. He Liang, the guard who received Yuan Yingping said, "Yan Li is doing fine." "He is being treated at the best hospital in Chifeng City." Then, He Liang phoned Bu Ren and Liu at the Hongshan District Police Department National Security Division. The two police officers confirmed Yuan Yingping's identity, but refused to let her see Yan Li at the hospital because "it's too late." They sent her to an Internship Hotel near the No. 1 Technical School in Chifeng City and told her to wait for information.

By 10:30 a.m. the next day, Yuan Yingping had not heard anything from the authorities. She anxiously went to the Hongshan District Police Department and talked to Bu Ren, in charge of the Hongshan District National Security Division, and officer Liu Dui. Bu Ren said, "Yan Li passed away. Yan Li was dead the first time I called you."

Yuan Yingping was shocked and didn't know what to say. She finally said, "I don't know who called me. I was waiting for the package you said you were going to send me." Bu Ren said, "I was kidding with you. Yan Li is at the hospital right now." He leaked the truth again when he saw Yuan Yingping holding a large package, "Is that the shroud you bought for him?"

The authorities told her that she could not see Yan Li because he was still being treated in the ER. They told her to go back to the hotel and wait.

In the morning of December 7, Yuan Yingping again went to the Hongshan Police Department. Bu Ren and Liu Dui told her in a firm tone, "Yan Li died." The police took her to the Intensive Care Unit on the fifth floor of the No. 2 Hospital in Chifeng City. Yuan Yingping saw Yan Li's body covered with a piece of white cloth. Yuan Yingping removed the cloth and saw her husband stark naked and lying on his back. His body was cold and rigid, but his eyes were wide open. She lost control and cried out loud.

After Yan Li's death was confirmed, his wife Yuan Yingping phoned other family members who went to Chifeng City. The plainclothes police officers strictly monitored Yan Li's family. They even followed them when they made phone calls and went to the restroom, which asserted tremendous pressure on Yan Li's family.

At 9:30 a.m. on December 8, personnel from the Hongshan District Detention Center, the Hongshan Police Department, including the head prosecutor at the procuratorate and the medical examiner, hastily announced the cause of death and the treatment of Yan Li's body. The police department wrote a so-called agreement and coerced Yan Li's family into signing it. The "agreement" is reproduced and reads as follows: 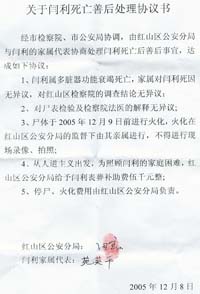 The above photo shows the agreement Yuan Yingping signed under coercion from the local judicial officials and police, when she was not in her right mind due to grief, confusion and shock. This "agreement" fully demonstrates how deft the Chinese Communist Party is at villainous methods to cover up its crimes and deceive people.

Yuan Yingping was mentally traumatized by the sudden death of her husband. The local judicial official and police officers took advantage of her mental state and coerced her into signing the agreement.

After she returned to the hotel, Yuan Yingping calmed down and left the hotel when the police who watched her were eating. Yuan Yingping told us, "Yan Li died such a horrible and suspicious death. I won't take it if they offer me 500,000 yuan, not to mention 5,000 yuan." She is trying to get a lawyer and prosecute the criminals.

After Yuan Yingping left, the officials at the Chifeng National Security Bureau were very nervous and combed the whole city looking for her, including large hotels, hostels, the railroad and the highway. They detained the rest of Yan Li's family at the Internship Hotel. Before 8:00 a.m. on December 9, the authorities forced six of Yan Li's family members into seven cars with the judicial, legal and justice systems' insignias on them. Without Yuan Yinping's presence, Yan Li's oldest brother signed an agreement to allow the speedy cremation of Yan Li's body.

Before July 20, 1999, Yan Li bought Dafa books and videotapes to disseminate Dafa in a dozen nearby villages. After the persecution began, Yan Li went to Beijing nine times to clarify the truth to the government and to uphold his belief, and was fired because of it.

He was detained twice during his appeal and was held at Jinzhou City Custody Center. During the first detention between August 14, 1999 and September 14, 1999, Wen Shizhen, governor of Liaoning Province at the time, personally issued an order "no reform, no release" specifically regarding Yan Li. He was held at Jinzhou City Forced Labor Camp for two years, beginning on October 25, 1999. He persisted in his belief and was savagely tortured. He was detained in solitary confinement for several months. After the two-year term expired, his term was extended by nine months and he held a hunger strike. He was force-fed and was not released until he could not eat and was at the brink of death. During the one month he stayed at home, he could only eat liquid food and could not take care of himself. He needed help getting out of bed.

In September 2004, Yan Li was betrayed when he clarified the truth on a bus going to Kalaqinqi. He was detained at the Jinshan Police Department in Chifeng City. He held a hunger strike for nine days and was released when he was again at the brink of death.

Yan Li was tortured to death within a dozen days after his last arrest. According to the police, copies of the Nine Commentaries on the Communist Party and truth materials were found in the home of the fellow practitioner, where Yan Li was arrested. Yan Li was charged with "overthrowing state power." Mr. Yan Li held a hunger strike after the arrest to resist the persecution. Beginning from November 26, the police force-fed him at the detention center and sent him to a hospital for emergency treatment on December 4.

It has been learned that another practitioner, Wang Xiaodong, pseudonym Li Xin, who was arrested along with Yan Li, and practitioner Yue are also on a hunger strike at Hongshan Detention Center. They are both near death.