(Clearwisdom.net) An Italian tourism monthly magazine "Viaggiand" took "Millennium China" as a topic and published a series of articles introducing the five-thousand-year old Chinese culture, the humanities and the natural landscapes of China in the November 2005 issue. In the special column "the Spirit and the Rule," Falun Gong is introduced under the title "Falun Gong, a Path of Cultivation." 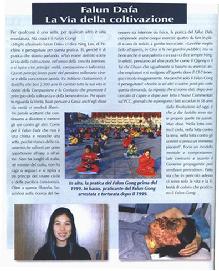 The article explained that Falun Gong is a cultivation practice that helps people obtain intrinsic improvements. The principles of the cultivation are Truthfulness, Compassion, Forbearance, which are the essence of the Chinese ancient culture.

These three simple characters unceasingly influence people's life. Falun Gong is not a religion. Neither is it a religious sect because Falun Gong does not have any religious form, and exists without churches, priests, leaders and followers. Practitioners discipline themselves in their daily life according to the three-word principle and live peacefully.

Apart from the theory which enables people to obtain healthy minds and bodies, Falun Gong's cultivation also has five sets of exercises: four of them are practiced standing, and one is sitting in meditation. The article also informed readers, "it is better to practice the exercises outdoors, but it also can be practiced at home and other locations."

Regarding the persecution of Falun Gong in China, the article helped readers to become aware that Chinese Falun Gong practitioners' lives and freedoms are being violated and that they are suffering from brutal torture because they refuse to renounce their faith in Falun Gong.