The touring photographic exhibition, "Falun Dafa Practitioners Validating the Fa" visited the Handerson Shopping Center in the Western District of Auckland on November 19, 2005.

An older Chinese woman visited the exhibition with her little granddaughter. While listening to practitioners explain the stories behind the photographic works, she told her granddaughter, "Look at those children in the photos, they lost their parents who practiced Falun Gong. They are so lovable. You'd better be a good child like those children on the photos." The older lady commented that the photo exhibition was beautiful. She said, "Thank you, it's so kind of you to tell me about Falun Gong. I don't know how to read, but I'll bring back your materials to my son, and ask him to read them for me." 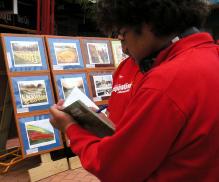 The two Maori young people in the photo above listened to a practitioner explain the content of the photo exhibition, especially the photo depicting Ms. Gao Rongrong whose face was disfigured by torture. They were amazed and exclaimed, "How can the Chinese Communist regime treat their people like this? How can they be so cruel and inhumane? It's just too sad. What can we do for you?" The practitioner told them, "Learn the truth about Falun Gong, and remember that Falun Dafa is great! Tell this to all the people around you."

On November 20, 2005, the photo exhibition came to the Chinese community in the Western District of Auckland. Many Chinese people came to see the exhibition. A mother and son who came to the community to find some people carefully viewed each photo. After looking at the photos depicting children who have lost their parents due to the persecution and the photo depicting the persecution of Ms. Gao Rongrong, they said, "We know that Falun Gong is good. We all have sisters and children still in China, and we know that they (the Chinese Communist Party - CCP) are so cruel and malicious. We still want to go back to China. The CCP is so cruel, and therefore we do not dare to sign the petition to show our support publicly. We are very sorry, but we support you in our hearts."

There was a retired older man, who looked as if he had held a position of some status in China. After viewing the exhibition, he had a conversation with a practitioner for about an hour. The older man changed from having an initial misunderstanding at the beginning of the conversation and raised many questions. The practitioner patiently explained to him the wonderfulness of Falun Dafa and answered his questions. Finally, the man complemented the practitioner by saying, "You really know a lot, and helped me learn much about Falun Gong. When you come next time, I'll come again." 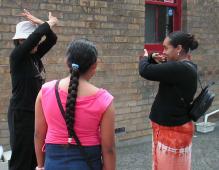 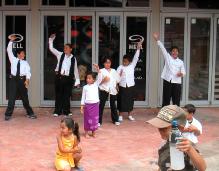 These children took the initiative to come learn the exercises after seeing practitioners doing them at the exhibition site.

On November 21, the photo exhibition returned to the Birkenhead District in North Auckland. 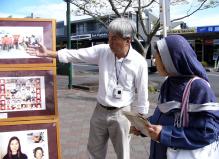 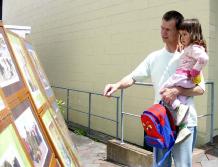 A father explains the photos to his daughter 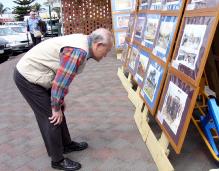 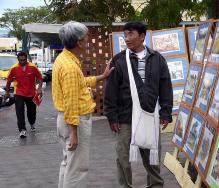 The man in the black jacket told the practitioner, "I'm Indonesian, and also suffer persecution for believing a religion. I sign your petition to support you. Come to find me if you come to Indonesia." 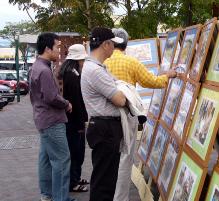 The three members of the family in this photo are from Taiwan. After listening to the practitioner's explanation of the exhibition, they said, "Taiwan and Mainland China have the same ancestors. If Taiwan can support Falun Gong, why does the mainland treat Falun Gong so cruelly? Isn't it good for people to have a belief?" 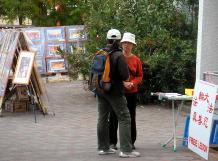 The young woman with the backpack in the photo above recently immigrated to New Zealand from China due to her technical background. She asked the practitioner, "They [the CCP] said you do this [clarify the truth and do the exercises] all day long without doing anything else." The practitioner patiently told her, "Some of us have worked several dozen years inside China. It is because of the malevolent CCP's persecution that we left our home and came here. Some of us spend our spare time and use our own money to make the photos to be exhibited and to make our truth-clarification materials. Our aim is to tell all people that the CCP is still brutally persecuting Falun Gong, a group of people who believe in the principles of 'Truthfulness-Compassion-Forbearance.' I hope that you can learn about Falun Gong and the persecution and tell your relatives and friends that Falun Dafa is great." The practitioner also told her that the publication of the Nine Commentaries on the Communist Party is to help people clearly see the true nature of the Communist Party. It has done too many evil deeds and Heaven will destroy it. The young woman said, "I'll read your materials, and visit Minghui/Clearwisdom Website. I'll read the Nine Commentaries. I'll cherish the materials you gave me, as I want to understand you. I'll also tell my parents all this, because they are both veteran Communist Party members."

Two overseas Chinese students saw the photos of orphans of Falun Gong practitioners who have died as a result of the CCP's persecution, and took the initiative to sign the petition to support rescuing the orphans.