On January 1, 2005, Falun Gong practitioners from the UK took part in the world famous Lord Mayor's New Year Parade in central London. Over one thousand performers from twenty countries around the world took part in this event. As representatives of traditional Chinese culture, Falun Gong practitioners in United Kingdom participated in this grand parade for the second time. They were also invited to the parade last year. The parade went past the major tourist sites of London and over half a million people crowded the streets to watch.
About 500,000 people watched the parade

The Falun Dafa procession was led by several banners hoisted by practitioners, and then came the Fan Dance and Lotus Dance troupe, which consisted of 20 women practitioners in beautiful traditional Chinese costumes. On the decorated float, a giant "Zhuan Falun" book model sat on a huge lotus flower. Meanwhile, several practitioners stood on the float demonstrating the Falun Gong exercises. After the float was the waist drum troupe.

The practitioners walking along both sides of the parade were busy distributing leaflets and many spectators got to learn about Falun Gong and the brutal persecution that is happening against practitioners in China. The loudspeakers on the rostrums set up along the parade route mentioned Falun Dafa and "Truthfulness, Compassion and Forbearance" many times. 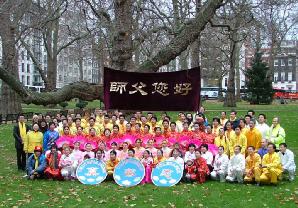