, Falun Dafa consists of four gentle exercises and a meditation that teaches the principles of Truthfulness, Compassion, Forbearance (Zhen Shan Ren); and

In Witness Whereof, I have hereunto set my hand and caused the Seal of the City of Creve Coeur, Missouri to be affixed this 13th day of May 2004. 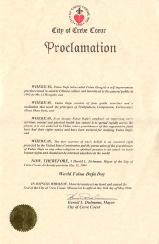