The forced labor camp authorities continuously organize public meetings with different intensity levels. They mobilize all criminals, including policemen and those employed in the camp, to slander Falun Gong and read materials that defame Falun Gong. Sometimes some 100 criminals and policemen from the division criticize and denounce Falun Gong during the same meeting, as well as insult and swear at Falun Gong practitioners

This iron cage at the Changlinzi Forced Labor Camp is about 1.5 meters tall, 70 centimeters in width and about 1 meter in length. A person is unable to stand up straight. He must bend his back and lower his head. The police guards handcuff the practitioner's hands to the top of the iron cage; therefore the practitioner can neither stand straight up nor squat down. One can only do a half squat. It does not take long for the muscles to be stressed and sore in this excruciatingly position. The practitioner is handcuffed and held in this position 24 hours a day. Bi Zhihai, Li Zhong, Zhang Qingjiu and some other practitioners were handcuffed inside the cage for 15 successive days. Ma Yongqian, Lu Song, Jin Xigui, Yanjiguo had been handcuffed inside the iron cage many times. In winter it was biting cold in this cage. The police guards would remove the practitioners' shoes and socks and force them to stand there barefooted. Some practitioners would stand on inch thick ice. As a result their feet were frozen and suffered from frostbite. This torture device is very cruel and the one who has been handcuffed and hung inside the cage will suffer pain for a long time afterwards. Many practitioners became disoriented and in a stupor after suffering in this cage for extended periods. Several dozen practitioners had been handcuffed inside this cage more than once.

5. Assigning a Group of People to

Bring Practitioners to the Point of Exhaustion

The Forced Labor Camp assigns this task to various sections and divisions. They then interrogate Falun Gong practitioners from morning till evening, or at midnight.

Ju Yajun, just over 30-years-old, was very healthy. He was carried into the clinic for forced feeding because he went on a hunger strike to protest his illegal sentence. During the forced feeding they injected unknown drugs. After he came back he was in a state of stupor and could not speak proper sentences. He repeatedly pointed to his arms and said, "Needle injection, needle injection..." To evade responsibility, the Forced Labor Camp sent him home. He died not long after he was sent back home.

The Forced Labor Camp carried out force feedings of practitioners who went on a hunger strike to protest their illegal sentence to forced labor. More often than not the rubber tube had blood on it. The forced feeding injured the nose, esophagus and stomach of quite a number of practitioners. Two criminals' gripped Mr. Kong Xiaohai's arms during force-feeding. He spit up blood after the forced feeding and suffered from great pain. He died two days later, but the Forced Labor Camp falsely claimed that Mr. Kong died of a heart attack.

The Forced Labor Camp has become quite adept in using physical punishment over extended periods of time. They continue to persecute practitioners who refuse to renounce their beliefs. For example, they force the practitioners to bend over with two legs apart, head bowing to the ground and two arms held in an upward position from behind. The practitioners were forced to remain like this for four to five hours. As a result they would have sore backs and legs. Mr. Yuan Qingjiang suffered from such physical punishment for an extended amount of time. He was forced to stand against the wall in this posture from early morning until 12 midnight.

9. Hanging on the Prison Bars or Bed Frames

The Forced Labor Camp hung a large number of Falun Gong practitioners onto prison bars or bed frames for 24 hours straight. They were not allowed to rest. The victims become extremely fatigued and suffer from heart failure. Mr. Zhang Tao and Mr. Li Hongbin began a hunger strike to protest after they were hung on the prison bars. The guards then rushed them to Wanjia Hospital for emergency treatment, but both of them died.

Many practitioners were deprived of sleep for six to seven days. They became mentally confused and became extremely fatigued. A lot of practitioners had been hung like this for half a month. Afterwards they were in a stupor.

1) Forcing practitioners to squat on the ground with their hands on their back. Then, the criminals or the police would use a bench to hit the practitioners' back and head. If the practitioners showed the slightest defiance they would suffer from even worse torture methods (See Illustration 3). Mr. Sun Qiang and many others refused to obey the depraved people, so they were dragged into the special education classroom where they suffered further inhuman tortures. Yan Jiguo, Tan Chengjun, Yu Guang and other practitioners were locked into the iron cage, where eight criminals beat them up. Then were locked to the torture chairs to suffer from more cruel tortures.

2) Pushing the practitioner to the ground, while pulling his two arms backwards from his back, pushing them forward until they touch the ground and then row the arms as if rowing a boat. This torture causes extreme pain. (See Illustration 8)

Putting a foot on the buttocks of the practitioner and then shoulder one of his legs upward with force. This torture causes a lot of pain in the lower body parts. (See Illustration 1)

3) Inserting hard objects between the practitioner's fingers and then squeezing the fingertips with force or punching the fingertips with fists. As a result the ligaments of the fingers were instantly torn or stretched, which was extremely painful. Some practitioners sustained torn and stretched ligaments to all ten fingers, and their hands were contorted and crippled. It was too horrible to look at. (See Illustration 10)

4) Handcuffing the practitioner's hands to the bed frame and tying up the legs. Then two criminals pull the rope to swing the practitioner back and forth. With the handcuffs tightened one suffers horrible pain to the wrist joint. The violent swinging is extremely painful. (See Illustration 5)

5) After practitioners were handcuffed and hung onto the bed frame or prison bars, the prison guards or their assistants punched their chests and abdomens, kicked them forcefully and hit the practitioners with their knees. Some of the practitioners began to spit up blood because their internal organs were damaged from this abuse. (See Illustration 6) Falun Dafa practitioner Qiu Baoxue and a practitioner from Shuangcheng City were beaten up like this for more than ten days. Qiu Baoxue suffered from great pain because the tight fitting handcuffs cut into his wrists and hurt the bones. Thus, his two arms were crippled and he was unable to pick up or carry anything.

8) Whipping with a leather belt.

10) Forcing the practitioners to squat on the ground with hands clasped behind their back and not allowing any movement. After a long period of time the practitioners would feel extremely sore and painful in their legs. They were forced to stay in that position from five o'clock in the morning until midnight. Sometimes this torture went on until 2 a.m. Whenever the practitioner did not cooperate in any way or form, he would suffer from even more cruel torture methods (See Illustration 3). Every practitioner who refused to renounce his belief would be subjected to physical punishment. Many practitioners were forced to squat on the ground for as long as two months. 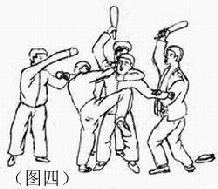 11) Hanging up the practitioner and then using needles to stab their feet. (See Illustration 7)

14) Using an electric baton to shock the practitioner all over his body, including mouth and genitals.

16) Stomping on the fingers.

The above are only a few of the cruel tortures used on Falun Gong practitioners at the Changlinzi Forced Labor Camp. We will disclose more of the torture methods used at that camp at a later date. All the illustrations were drawn based on descriptions by tortured practitioners, or from eyewitness accounts.

(1) Known as "open cangues" and "secret cangues": Cangue, the name of an instrument of torture, is now used for a person who is designated to supervise a practitioner.