On May 23, Falun Dafa practitioners at National Central University held an outdoor Falun Gong photo exhibition to let more people know about Falun Dafa and the persecution happening in Mainland China. Some young practitioners also participated in this event. When they first came to the exhibition site, they played around for a while. When their aunty told them that it was time to read Zhuan Falun, they all got seated on the grass quickly and started to read out loud. All the young practitioners' faces had serious expressions while they were reading. 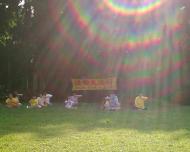 There were also many people who were just walking around for pleasure. Some of them sat on the grass with their children, some were flying kites, some were sitting on benches and chatting, and some were walking their dogs. When the Falun Gong exercise music started to play, many of them were attracted by the elegant and peaceful music, and then focused their eyes on the young practitioners, who appeared to be even more innocent and lovely while they were doing Falun Gong exercises.

Seeing such a serene scene, we couldn't help thinking about Mainland practitioners who are still being persecuted. The Jiang regime launched a signature campaign in order to apply social pressure to Falun Gong and justify the persecution. During the campaign, even pupils were forced to sign. If a child didn't sign, he or she wouldn't be selected as student leader and might even be forced to quit school. Moreover, police could arbitrarily ransack practitioners' homes at any time, and many practitioners have been forced to pay fines for practicing Falun Gong, while many are being closely monitored. Practitioners in Mainland China could be arrested at any time for no reason. Why are Chinese Falun Gong practitioners on opposite sides of the Taiwan Strait facing such different treatments? We hope more people will pay closer attention to Mainland practitioners' human rights and freedom of belief and help to end this persecution as soon as possible. We hope more people will come to learn about this righteous and pure practice--Falun Dafa.