Falun Dafa practitioner Ms. Li Yuxia, 57 years old, was a farmer in Group 5, North Town, Weiyuan Town, Kaiyuan, Tieling City, Liaoning Province. After Jiang began the persecution of Dafa, Ms. Li was persecuted and harassed by the local police many times. On May 3, 2002, she died from the devastating persecution to her mind and body. 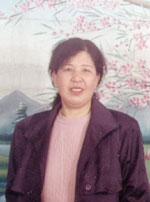 On December 24, 2000, Ms. Li went to Beijing to appeal for Falun Dafa and was arrested for unfurling a banner in front of Tiananmen Square. She was unlawfully imprisoned and tortured in Chengde Jail and later was escorted home by local police. Two months after returning home, Ms. Li was deceived into going to a detention center by the Weiyuan Town Police Substation. She was released after being tortured for 35 days and fined 500 yuan.

Afterwards, police from Weiyuan Town continued to harass Li Yuxia. She was once taken to the police substation and tortured overnight. As a result of the relentless physical and mental suffering, Li Yuxia passed away on May 3, 2002.