(Clearwisdom.net) Minghui.org Correspondent Kelly Huang Reports from New York - On December 10, 2004, the World Human Rights Day, wind blew hard and misty drizzle fell. Falun Gong practitioners and a number of non-governmental organizations gathered in front of the United Nations Headquarters in New York to hold a press conference. They requested the United Nations to stage an open investigation on the Jiang's regime and the Chinese Communist Party's violations of Falun Gong practitioners' fundamental human rights and help stop this suppression. 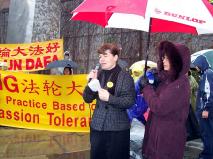 Representative from UN human rights NGO: Chinese government violates the Universal Declaration of Human Rights and must be held accountable. 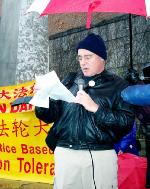 Cook spoke at the conference that Falun Gong practitioners' rally in front of the UN Headquarters today is to remind UN of Chinese authorities' continuous persecution of Falun Gong. He said that this totalitarian government employed political means, torture, imprisonment, and reeducation through forced labor to persecute Falun Gong. Its crimes are against humanity.

Mr. Cook enumerated some articles from the Universal Declaration of Human Rights including:

Article 9: No one shall be subjected to arbitrary arrest, detention or exile.

Article 10: Everyone is entitled in full equality to a fair and public hearing by an independent and impartial tribunal, in the determination of his rights and obligations and of any criminal charge against him.

Article 12: No one shall be subjected to arbitrary interference with his privacy, family, home or correspondence, nor to attacks upon his honour and reputation. Everyone has the right to the protection of the law against such interference or attacks.

Article 18: Everyone has the right to freedom of thought, conscience and religion; this right includes freedom to change his religion or belief, and freedom, either alone or in community with others and in public or private, to manifest his religion or belief in teaching, practice, worship and observance.

Article 19: Everyone has the right to freedom of opinion and expression; this right includes freedom to hold opinions without interference and to seek, receive and impart information and ideas through any media and regardless of frontiers.

Representative from the legal council of the Global Coalition to Bring Jiang Zemin to Justice: UN should uphold the spirit of universal human rights rather than being bewildered with polical and ecnomical interests. 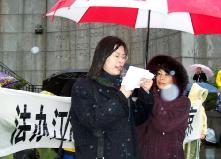 Representative from the legal council of the Global Coalition to Bring Jiang Zemin to Justice, Ms. Chu Woan-chyi

Representative from the legal council of the Global Coalition to Bring Jiang Zemin to Justice, Ms. Chu Woan-chyi addressed the press conference. She said what fells now is the rain, but what fells from those Falun Gong practitioners' family members' eyes is tears.

Ms. Chu said the up to present, a number of law suits have been filed against Jiang Zemin in many countries and areas. What he is accused for are the most severe crimes in the international criminal laws since the World War II including genocide, torture, and crimes against humanity. These three crimes are generally believed to be the most seriously condemned crimes in today's world. Therefore, we gather in front of the UN Headquarters to appeal all governments in the civilized world not to tolerate, for the sake of political and economical interests, Jiang Zemin's continuous suppression of good people who believe in Truth-Compassion-Tolerance.

Ms. Chu continued, "On behalf of all attorneys of the legal council of the Global Coalition to Bring Jiang Zemin to Justice, I come here to sternly extend our wish: All countries of the United Nations, please do not ignore the facts and sacrifice the spirit of the universal human rights for the sake of economical and political interests."

Falun Gong practitioner: Call upon all countries in the world to send out voice of justice and help stop the persecution.

Falun Gong practioner, professor from Metropolitan College of New York, Mr. Feng Keran said, "Spokesperson of China's Ministry of Foreign Affair Zhang Qiyue claimed a few days ago that improvements of China's human rights were obvious to all. It is indeed obvious to all! Over the past five years, a hundred million Falun Gong practitioners who cultivate themselves in accordance with Truthfulness-Compassion-Tolerance have been persecuted in China. Their family members and friends are also incriminated. This is no longer an issue for a hundred million people, as so many people are incriminated. At least 1000 people were tortured to death, several thousands people were forcibly sent to psychiatric hospitals and injected with drugs that damage the nerve-systems. More than 100,000 people were illegally imprisoned in forced labor camps. Countless families are mentally tortured and financially extorted. This is what Jiang Zemin claimed, 'China's best human rights period'."

Mr. Feng stated that currently the suppression of Falun Gong is still going on. We call upon all countries in the world to send out voice of justice and help stop the persecution.