Zou Farong was born on November 15, 1999. Her family members and friends call her Rongrong. Rongrong is the daughter of practitioner Zou Songtao and his wife Zhang Yunhe. Right now Rongrong lives with her baby-sitter Zuo Yali most of the time, and occasionally at her grandparents'. Rongrong's current address is No. 44-202 Shanxian Road, Qingdao City, 266002.

Zou Farong's father is Zou Songtao, who was born on April 8, 1972. On November 3, 2000, Zou Songtao was tortured to death in Wangcun Forced Labor Camp in Zibo City, Shandong Province. He was only 28 at the time. 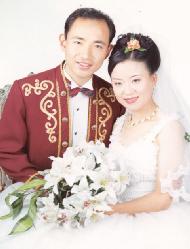 Zou Songtao began to practice Falun Gong on April 8, 1996. He was a Falun Dafa assistant in Qingdao City. In mid-1999, he graduated with a Master's degree from the department of Marine Biology at Ocean University of Qingdao (currently Ocean University of China). After the onset of the persecution in July 1999, because Zou Songtao refused to give up his belief, no work unit dared to hire him. The police arrested him at his home many times. On July 22, 1999, the police arrested him and detained him in a small hotel for a month. In October 1999, he went to Beijing to appeal for Falun Gong. In early November, after returning from Qingdao, the police arrested and detained him for a month. During his detention, the police guards and inmates cursed and beat him. When he was released, his ankle was swollen. In May 2000, Zou was arrested again for providing a place for practitioners to share experiences. He was handcuffed to an iron chair (The iron chair is made of steel pipes. Victims are restrained on the iron chairs with both arms and legs tied for a long period of time. See http://www.clearwisdom.net/emh/articles/2002/1/9/17577.html for an illustration) by the director of the Taixi Police Station, Gong Guoquan, in Qingdao City, Shandong Province. Gong beat him with the sole of a shoe so viciously that he bled profusely and his head swelled up grotesquely. He became unrecognizable. He passed out for more than 20 minutes. Later on, the persecutors detained Zou in Dashan Detention Center in Qingdao City for a month. He was released in early July 2000. In July of 2000, Songtao was tricked into going to the Qingdao City Police Department, and was subsequently sent to Qingdao City Labor Camp in Shandong Province. At the end of September 2000, he was abruptly transferred to Wangcun Labor Camp in Zibo City, Shandong Province. During his detention in the labor camp, his friends and family members were not allowed to visit him or bring him food or clothes.

Zou Farong's mother is Zhang Yunhe, who was born on November 2, 1973. In 1994, Zhang graduated with an associate degree in accounting from Qingdao University. Because of her excellent school record, she was allowed to study for a B.S. degree. She accepted a job at the Bank of China in Sifang District, Qingdao City. One year later, she resigned and accepted a position with Qingdao TFL Chemicals Co. Ltd. as an accounting manager. The company gave her great reviews, as she worked very hard and excelled at her work. In late 1997, she began to practice Falun Gong. In November 1998, she was happily married to Zou Songtao. In April 2000, after Zou was arrested at home, Zhang went to appeal in Beijing. She practiced the Falun Gong exercises in Tiananmen Square. The police arrested her and took her to Changping Detention Center, where 7 or 8 policemen beat her cruelly. They also pinched her until she lost consciousness. The perpetrators then pulled her hair and knocked her head against the tile floor. Later on, Zhang Yunhe was escorted back to Qingdao, after which the local police harassed at her work unit continuously. Under pressure from the police, her company fired her in July 2000.

After Zou Songtao's death, Zhang lived with her daughter and elderly mother, who was in poor health. In May 2001, Zhang was caught distributing truth-clarifying flyers. Therefore she was forced to leave home, going from place to place. In February 2002, Zhang went back to Qingdao. She was arrested together with other practitioners at a practitioner's home. After her arrest, Zhang was detained in Dashan Detention Center for around 6 months. Because she has relatives overseas, the police did not notify her family members of her arrest. Instead, they detained her in secret. The Public Security Department of Shandong Province was directly involved in Zhang's arrest and detainment. It has been more than two years since her last arrest, yet the local police never told her whereabouts to her family members, saying that they were unaware of her whereabouts. The "Anti-Cult Association" and the "610 Office" of Qingdao City were also involved in the imprisonment and persecution of Zhang Yunhe.

Zou Songtao's father is Zou Deming (who is a teacher), and his mother is Cheng Yuwu.