Whereas, Falun Dafa practitioners have visited our city in support of National Rescue Month To Rescue American Charles Li and Families being tortured in China; and

, Falun Dafa is self-improvement practice and system of exercise and teachings originating in ancient Chinese culture that generate health for the mind and body and emphasize leading one's life according to the principles of "Truth, Compassion, and Tolerance"; and

, U.S. Citizen Dr. Charles Li and the relatives of over 40 families in the U.S. are suffering in Chinese jails and labor camps solely because of their Falun Dafa practice and belief in Truth, Compassion and Tolerance.

, I, Harper Peterson, Mayor of the City of Wilmington, North Carolina, do hereby proclaim September 16, 2003 as

To rescue Falun Dafa Prisoners in the People's Republic of China.

On behalf of the citizens of Wilmington, I extend best wishes and support to the ongoing efforts. 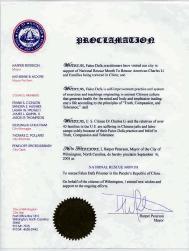