Receipts Issued by Police Serve as Evidence of the Property They Stole from Dafa Practitioner Mr. Zhong Hongxi (Photo)

On May 11, 2003, Clearwisdom.net posted an article entitled "Mr. Zhong Hongxi Died From Torture in the Fushun City Labor Camp, Family Members Illegally Sent to Forced Labor Camp," which revealed the facts of the persecution of Zhong Hongxi's family. (http://www.clearwisdom.net/emh/articles/2003/5/11/35500.html)

The article mentioned that, "On December 26, Zhong Hongxi was sent to Fushun Forced Labor Camp (Wujiabao). Police confiscated everything from Mr. Zhong's convenience store. They also confiscated everything from the home of his sister-in-law. They took all the money, even pocket change. They sealed the doors and left a twelve-year-old behind, alone."

These four receipts (below) are powerful evidence of their robbery. According to these receipts, we can conclude that they ransacked Mr. Zhong's home at least three times. The person involved signed the receipt with: "Zhong Hongxi refused to sign." They didn't realize this would be irrefutable evidence of their crimes.

According to these receipts, they did not even pass over two little bags of sesame seeds.

The following is a list of the property confiscated as recorded on the receipts; it is only a portion of the articles they stole from Mr. Zhong's store. 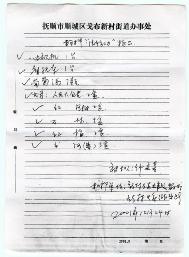 One television
One motorcycle
Wine: 7 Bottles
Cigarettes: 13 packs in total 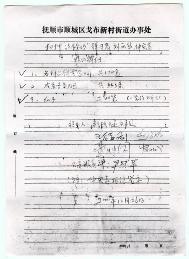 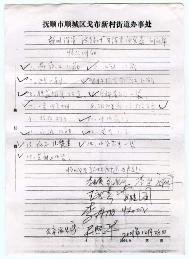 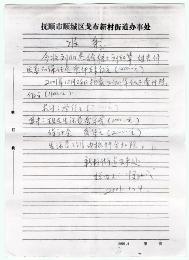 The police extorted money from Zhong Hongxi's sister-in-law and auctioned off the property they stole.

The following is a list of signatures of those who ransacked Zhong Hongxi's home, but some of the names are very hard to recognize and need to be confirmed.