Memory of Light - A Story of Reincarnation

(Clearwisdom.net) This is the story of a little girl named Susan and a little boy named Sam. It took place in a small town in the southern US at the turn of the last century. 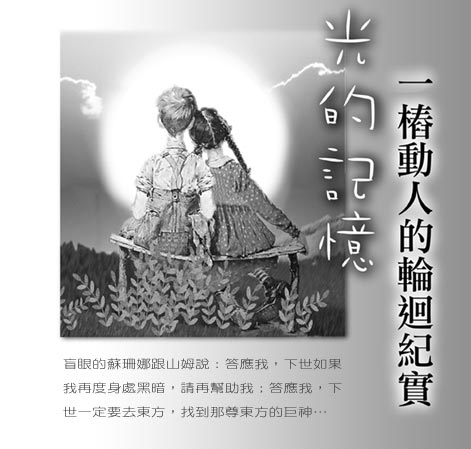 Susana and Sam were neighbors. Susana's parents were poor country folk and Sam was the child of a carpenter. Susana lost her eyesight after a severe illness when she was one year old. Sam and Susana hung around together ever since they were little, and had become very close friends.

It was not until Susana was three that she had learned to walk, at which time Sam was already eight years old. He took her to rivers and mountains, he taught her how to fly a kite, and they tended geese in the pasture together. He didn't mind that she was a little blind girl. At the age of four, Susana was able to tell the directions of the wind, she smelled the flowers and listened to the birds sing. With her hair styled in two braids, she was extremely introverted and shy, and was not good at verbally expressing herself. Kids in the town mocked her and would not play with her. Once, when a boy made a face at her, Sam tried to stop him. The little boy said, "Susana can't see me! She's blind, anyway. She'll be living in darkness forever."

This was the first time Susana had heard the word "darkness." She asked Sam what darkness meant, but Sam didn't know how to answer the question.

To be Able to Feel the Light is Good Enough

When Susana was five years old, one day Sam came over to visit. He took her to the window and let her face feel the warmth of the sunshine. Then he asked her what she felt. After standing in the afternoon sun for a long while, the little girl said, "warm." After a little while longer, she added, "a little bit hot." So Sam told her, "Susana, as long as you are able to feel the light, that is good enough. You don't need to know what darkness is."

Susana started to learn to read Braille when she turned six, whereas Sam, who had just turned eleven, went to school in town. Sam never treated Susana like a blind person. They still climbed mountains and grazed animals together. Susana even learned to climb trees. Sometimes Susana fell asleep on a tree branch, and Sam would carry her home on his back. Keeping each other company, this is how they grew up together.

One day, early in the morning after a rain, Susana was in her room when she heard people cheering outside. Kids were clapping their hands shouting: "Look! Look quickly!" She came out from her house and asked, "Sam, what happened?" Sam replied excitedly, "It's a rainbow! It's such a magnificent sight to see!" Susana suddenly started crying, and this was the first time that she had cried for not being able to see.

Yearning for Mysterious China in the East

By the time Susana was nine, in addition to reading Braille, she could tell all kinds of stories. Kids in the town came to listen to her story-telling every Sunday. Ever since then, nobody ever bullied her again. Even adults felt strange about how she could know so much without being able to see.

Sam had already gone out of town to attend high school. When he came back every weekend, he told Susana what had happened at school. He collected a lot of colorful glass beads and gave them to Susana. Sam's favorite subject in school was History. He told Susana about an ancient country named China on the other side of the earth. In this eastern country lived noble emperors and princesses with dark hair. Since then, both of them had a yearning for this mysterious country.

A Giant God Appeared in a Beautiful Circle of Light

Sweet and wonderful--they grew up together this way. But when Susana was eleven they ran into something very strange. It was one summer evening, while they were catching fireflies by the river. All of a sudden, a circle of light appeared in front of Sam's eyes, which emitted a glittering of extremely beautiful, yet gentle and bright colors. Sam had never seen anything like it.

Sam was extremely surprised. He lowered his voice and said, "Susana!" At that moment, Susana also felt very warm. She asked, "Sam, what is it? Is it light?" In a blink of an eye, Sam saw a giant man appear inside the light circle. He was beautiful, beyond description. He stood in the light circle, looking down on them kindly. Sam and Susana were immersed in a ray of light. Meanwhile they heard a kind voice telling them, "You are my children." At the time it seemed as if the whole world had become very quiet.

of Future Visit in the East

This was such a magical moment! They were still immersed in this magical atmosphere even after the giant man had disappeared. They stayed very still and did not move. This was truly an unforgettable summer. At first, Susana thought what Sam had seen was God, but Sam assured her that the giant man he had seen was not God, for he was wearing golden-yellow clothes.

After Sam returned to school, he searched for information regarding golden-yellow clothes. When he went back home he told Susana, only an Eastern God would wear this kind of clothes and stand inside a big light circle, and people refer to him as a "Buddha." Yet they didn't understand why this giant Buddha said that they were his children, and weren't they God's children? They didn't dare to tell the adults about this experience. Nevertheless, this secret of summer made them yearn for the East even more. So they made a promise that after they were grown up they would go to the East and look for this giant Buddha.

Yet Destiny is Beyond One's Control

In no time, Sam and Susana had become adults. Their friendship had grown even stronger. They were able to understand each other even without exchanging words. Finally leaving their parents and bidding goodbye to the small town, they landed in a big city to earn a living. Sam had two jobs, one as a postman, and the other working in a restaurant. He worked very hard in order to make enough money to travel. He wanted to go to India first, because he was deeply into Indian Yoga. Working for a warfare institute, Susana wanted to become a writer. Of course, neither had forgotten about that summer secret of theirs, nor had they forgotten about their promise.

After being through the extraordinary experience of that summer, Susana miraculously began to see all kinds of marvelous scenes in her mind. She often told Sam that her memory of the light comes from that summer when she was a child. She is able to see the things that belong inside the mind, yet she can't see the things outside the mind that you and I can see. She was able to see other worlds yet she could not see this world.

However, destiny is beyond one's control. When she was twenty-three, Susana was infected with malaria, which back then was a very terrible disease. Susana was tortured by malaria for eleven days. She died during the night on the eleventh day. Before she died, she asked Sam, "Promise me that if I'm ever in darkness again in my next life, please help me again. Promise me, that in your next life you'll go to the East to look for that giant, eastern Buddha.

Finding Each Other in This Life to Fulfill Old Promises

What heartbreaking sorrow brings separation in life and parting at death! With tears in his eyes, Sam kept nodding his head. They were both influenced by the eastern spirits and believed in the next life. They had grown up together as intimate partners, yet when facing death, they were so caught off guard that they didn't know what to do. They didn't even have the chance to exchange the words that had been buried deep in each others hearts, "I love you!"

In this life, the woman who used to be Susana has become a Falun Dafa practitioner who lives in Mainland China. Her past life story plays like a movie before her eyes. She sighed, "Hi, Sam. Time flows backwards, and the wooden toys and colorful glass beads that you gave Susana are still there, coated with the dust of time. Maybe you can't remember our old friendship, but I still want to thank you for keeping your promise. When I returned to darkness, you really offered me help again. However, we all owe our thanks to destiny, because we really have found the Lord of Buddhas, and this is the true meaning of our lives!"