(Clearwisdom.net) It has been frequently taken granted that what one sees through eyes is real. But modern science tells us that what we see through eyes might not reflect the true features of things. 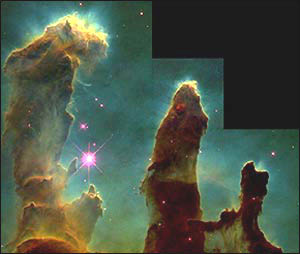 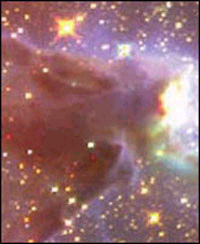 Fig. 1 shows the image of the Nebula called Eagle taken by Hubble Space Telescope at visible wavelengths. According to BBC news on May 14, the image was released in 1995 and has been named as "Pillars of Creation." The awesome pillars are several light-years long, big enough to stretch from our Sun to its nearst stellar neighbour. The image has become an icon for the grandeur and beauty of the cosmos.

The Eagle Nebula was described as a region of intense star formation, and you can see bright stars sprinkled across the image and embedded in the vast columns of gas and dust.

According to BBC scientific news on May 14, Professor Rodger Thompson, of the University of Arizona, US, has been observing the Eagle nebula using the Nicmos (near-infrared camera and multi-object spectrometer) on the Hubble Space Telescope. He told BBC news Online: "They look like very dark, dense columns of gas and dust. But when you view them in the infrared, you get a different picture."

The infrared images show that the Pillars of Creation do not contain a lot of material and that star formation is coming to an end. The only place where stars are being born is at the very tips of the pillars. The Eagle nebula has been influenced by a cluster of very bright, type O stars nearby. They have shaped and illuminated the nebula (and initiated star formation within it) whilst at the same time working to destroy it. The O stars, much larger and far more luminous than our Sun, would have formed quickly when the nebula was young. Although such stars burn for only a few million years at most, their influence on the development of the nebula has been profound.

"The optical picture alone is very confusing," Professor Thompson told BBC News Online. "You need to look in the infrared to understand what is going on and what happened in the past. The next step is to use the Chandra X-ray telescope to home in on the young stars in the Eagle Nebula because they radiate a lot of X-rays. That way we can take a census of what is exactly in these pillars."

In daily life, people sometimes unknowingly take it for granted that "what one sees through his eyes is real". In fact, what one sees through his eyes may not be the real manifestation of things, but only images at the visible wavelengths. Because flesh eyes are only able to sense the very limited visible range in the spectrum of electromagnetic waves. Flesh eyes are not able to directly sense the ultraviolet ray, X-ray, gamma-ray that have shorter wavelengths than the visible light, nor do they able to sense the infrared, radio waves that have longer wavelenghts. Flesh eyes are not able to see directly all kinds of microscopic particles. Knowing this very well, scientists put lots of efforts to invent various instruments to compensate the inability of flesh eyes. When we outlook the whisht sky in night, we may not be able to see anything profound. But using ultraviolet rays, X-rays, ?rays, scientists have found recently the frequent explosions of supernovas, collisions between galaxies and the gamma-ray burst. The huge soul-stirring changes which can not be directly observed through flesh eyes are in fact hidden in the whisht sky. Although utilizing modern scientific instruments, people are able to observe some electromagnetic waves other than the visible lights as well as some microscopic particles, there are still tremendous materials that modern scientific instruments are not able to detect, for example the so-called "dark substances." Scientists estimate that the dark substances contribute 87% of the overall universe's mass. The presently not very well understood things due to being unable to see through flesh eyes, for example, the human being's primordial spirit unveiled by the cultivation circles as well as other dimensions will, with the renovation of human understanding, become the common knowledge for the future people.