The First Day of Spreading Dafa in Augsburg, Germany 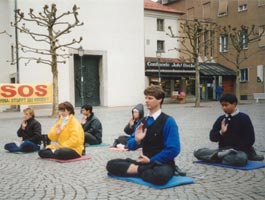 Augsburg is the third largest city in Bavaria Province of Germany after Munich and Nuremberg. We intended to have Falun Dafa Information Day there a long time ago. After a German practitioner applied for it, we finally settled on January 26, 2002. Practitioners in Augsburg had posted the notice at the university and other public places before this day so that the predestined people would be aware.

Even though it was a very windy day, more than 30 practitioners from Stuttgart, Munich and other cities came to the Moritz Square in downtown Augsburg. Everyone was touched when practitioners from faraway Austria and Berlin arrived.

Hongfa activities were held from 10 a.m. to 4 p.m. Practitioners demonstrated the five sets of exercises and handed out Dafa materials. Because this was the business center, there was a lot of traffic. Many people stopped by and watched the exhibit. Some looked at the explanation of the Swastika with interest, while some felt that Jiang's regime behaved inconceivably when they saw the photos of those practitioners who have been sacrificing their precious lives for upholding Truthfulness-Benevolence-Forbearance. More people were attracted by the five sets of exercises and asked for the materials one after another. Some even wanted to start learning right away and inquired about the related information. A German couple asked for the truth-clarifying VCD. Another young German greeted us in Chinese and got a brochure for his Chinese friends. We all felt that we should have come earlier. People were waiting for us to show them Dafa.