(Clearwisdom.net) Dafa practitioner Wu Jingxia from Weifang City, Shandong Province was illegally arrested on January 16 and was tortured to death on the 18th. (For more details, please read http://www.clearwisdom.net/emh/articles/2002/1/31/18287.html)

After her death, the guilty policemen strictly blocked the news while at the same time requiring that her family sign the agreement to cremate her body. Being threatened after he refused to sign the agreement, her husband left their home with their 15-month-old baby. Her mother was illegally monitored and followed by several people whenever she went out. According to inside information, Wu Jingxia's body has been cremated in response to pressure from the corrupt authorities. While Wu Jingxia's family members were changing her clothes, they saw that her pelvis was broken and pieces of the bone were exposed through the flesh. It was too horrible to look at and overcome by the sight, they could not continue to change the clothes on her corpse. The corrupt police said that they would give her family 20,000 Yuan [about $2500, or 4 years income of an urban work in China]. From this, they deducted 650 Yuan as a fee for refridgerating the body (50 Yuan per day for 13 days), 500 Yuan for transportation from the hospital to a funeral home, plus the cost of looking for Wu Jingxia's husband. (He had already left home for refusing to sign the agreement). With other fees added the deductions totaled about 4000 Yuan so they only gave the family about 15,000 Yuan. It was in this despicable way that they terminated a young and kindly mother's life.

In the beginning of this century, people all over the world enjoyed the joyful atmosphere of a family reunion. But Wu Jingxia's family, like thousands of others being persecuted for being Dafa practitioners, was filled with sorrow. It is Jiang's evil regime, which has brought about these human tragedies one after another. Evil will meet with its due retribution. This is also the principle on this earth. 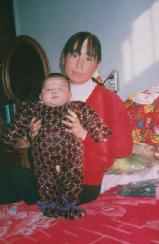 1. A photo of young and kind Wu Jingxia and her baby. 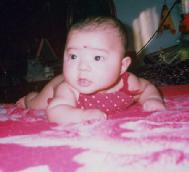 2. A photo of Wu Jingxia's son: You open your eyes widely searching for your mother in the crowd. You long to lay against your mother's breast and suck your mother's milk. However, child, you can no longer find your mother's familiar figure. The evil has taken her young life away and taken away the happiness that had belonged to you.

3. A photo of Wu Jingxia's son: You are waiting quietly, waiting for your mother once again to gently hold you up with her two warm hands.