Certificate of Appreciation from the Office of Secretary, South Carolina 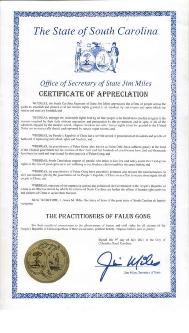 The State of South Carolina

Whereas, the South Carolina Secretary of State Jim Miles appreciates the efforts of people across the globe to establish and protect civil and human rights granted to all mankind by our creator and upon which our nation and state are founded; and

Whereas, amongst the inalienable rights held by all free people is the freedom to practice religion in the manner required by their faith without oppression and persecution by the government and in spite of all of the advances enjoyed by the modern world, religious freedom and other human rights taken for granted in the United States are systematically denied and repressed by certain rogue nations; and

Whereas, the People's Republic of China has a terrible record of persecution of dissidents and people of faith and of repressing individual rights and freedom; and

Whereas, the practitioners of Falun Gong (also known as Falun Dafa) have suffered greatly at the hand of the Chinese government for the exercise of their faith and that hundreds of practitioners have died and thousands have been tortured and imprisoned for their practice of Falun Gong; and

Whereas, South Carolinians support all people who strive to live free and nobly assert their God-given rights in the face of great oppression and suffering as our forebears did to establish this great nation; and

Whereas, the practitioners of Falun Gong have peacefully protested and resisted the encroachments on civil and human rights by the government of the People's Republic of China in an effort to secure those rights for all people in China; and

Whereas, exposure of the oppressive actions and policies of the Government of the People's Republic of China is an effective means by which the citizens of South Carolina can further the efforts of human rights activists and citizens of China to secure their freedom.

NOW THEREFORE, I, James M. Miles, Secretary of State of the great state of South Carolina do hereby recognize

The practitioners of Falun Gong

For their sacrificial commitment to the advancement of human and civil rights for all citizens of the People's Republic of China regardless of their social status, political beliefs, religious beliefs, race or gender.

Signed this 9th day of July 2001 in the City of Columbia, South Carolina