"These Crimes Must Be Stopped:" Swedish Practitioners in Gothenburg and Stockholm Expose the Evil 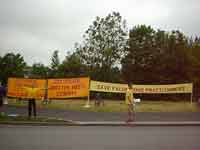 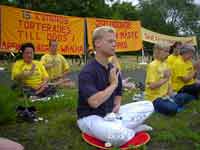 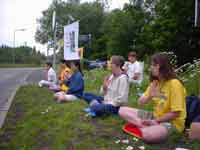 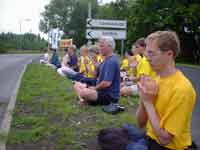 Practitioners gathered in front of the Chinese Consulate during the office hours for visa applications for 3 consecutive days in order to expose the evil deeds that claimed the lives of 15 female Dafa practitioners in the Wanjia Labor Camp. We could not accept that the evil forces were allowed to run wild. Our righteous thoughts were sent out with compassion and they reached far, wide and deep. The evil had no place to hide.

Fellow practitioners in Stockholm did the same in front of the Embassy. The national TV and another major TV station reported the atrocity at the Wanjia Labor Camp and interviewed practitioners. During these few days there was a lot of coverage in the mass media. One important paper called GP published a big article, an interview with Zhang Cuiying. She described the horrible methods of torture used by the labor camps in their attempts to force practitioners to stop practicing Falun Gong. Practitioners in Sweden shall whole-heartedly continue to find all means to expose the evil with our righteous thoughts and hearts.