On December 19, 2001, the mayor of South Amboy City, New Jersey issued and read a proclamation in the city council meeting. The proclamation strongly condemns the Jiang Zemin regime's persecution of Falun Gong, demands immediate dismissal of the "610" office and the release of all Falun Gong practitioners detained. It also expresses deep concern for the persecution in Zhejiang Province, the sister state of New Jersey. The office of the mayor also sent copies of the proclamation to the Secretary-General of the United Nations, Kofi Annan, President Bush, 5 other US senior officials, Jiang Zemin and 7 other Chinese senior officials. 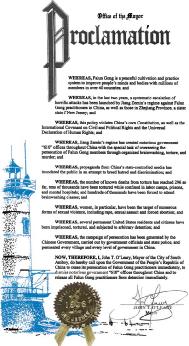