On May 13, 2007, nearly one thousand Falun Gong practitioners gathered in Sydney, Australia and held a large scale parade and rally to celebrate World Falun Dafa Day and the fifteenth anniversary of Falun Dafa's public introduction.

Several volunteers for the event were western practitioners who grew up in Australia. After the parade, a reporter interviewed a practitioner named Andrew. He told the reporter that he was pleased to see so many Australians coming to know the grace of Falun Dafa and the persecution in China through the event. He saw that most people had a positive reaction, including Chinese people on sidewalk.

Andrew started to practice Falun Dafa after accepting a flier on the roadside. Before then he had looked for the real meaning of life and tried other meditation systems. His doctor diagnosed him with a neurological disorder, and he had trouble controlling his emotions. After many tries, his disorder was still not cured. He started drinking and the situation became worse. After practicing Falun Dafa, his life changed completely. All of his physical and mental ailments were gone. He could take care of himself and worked as a manager in a supermarket. Andrew and his family were very appreciative of Falun Dafa for his regaining a serene and healthy life.

Andrew said that the persecution of Falun Gong is wrong, and that more people should know about the facts, especially the Australian government.

Oliver Perrett has practiced Falun Dafa for four years in a small town in Queensland, starting at the age of 17. He said that he went to China to teach English from 2004 to 2005. He explained the facts about Falun Gong to his students and colleagues. They were deceived by CCP's propaganda, though they were good people. His colleagues reported him to police. On one evening, eight police officers went to his dorm and arrested him. He was detained and interrogated overnight. He was forced to sign two repentance documents. He did not sign them, but was repatriated to Australia. He said that Falun Gong makes him healthy and happy. It is important to be a good person and Falun Gong teaches him how to be a good person.

It has been one year since Xinxin came to Australia. She started practicing Falun Gong when she was in first grade. She and her parents posted banners and handed out truth-clarification literature on the street in China. The police found them and sent her parents to labor camp. The school authorities threatened her with expulsion, but she persisted in practicing. She said, "After practicing Falun Gong, I feel at ease and peaceful. I feel privileged to be a part of this Falun Dafa activity. Today is World Falun Dafa Day and also Mother's Day. I hope that my mother can avoid the CCP's persecution and will be able to join me here in Australia."

Young practitioner Alison is twelve years old. She can read Zhuan Falun and recite Hongyin, and she is a member of the local Falun Gong dance team. She said that she was quite happy to participate in the event with other practitioners.

At the end of the parade, the reporter met two young practitioners and their mother, who came to participate in the event from Bowral, a city that is hundreds of miles away.

Three young practitioners and high school students in Sydney have practiced Falun Dafa for nearly ten years, and they are siblings. The eldest sister said that after practicing Falun Gong, their grades improved and they became healthier. They follow Falun Dafa to be good people. All of them study in very good high schools in Sydney.

Wang Lihuan and Wang Juntao, who are in their 70s, practice Falun Gong together and came to Australia from China. They came to Sydney from Canberra to participate in the parade. After practicing Falun Gong, the couple became healthy and understood the meaning of being good people according to Truthfulness-Compassion-Forbearance. In 2001, they were unlawfully imprisoned in China for persisting in the practice of Falun Gong. They were persecuted until they left for Australia. Now they can practice freely in Australia, but they have not forgotten those practitioners being persecuted in China. They persisted every day to distribute fliers in front of the Chinese embassy and explained the facts to Chinese people. 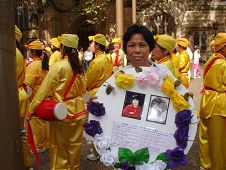 Ms. Guo Dongjuan, 82 years old, started practicing Falun Gong in 1998. She was pleased to tell the reporter that after practicing Falun Gong, all of her illnesses were gone. After the CCP initiated the persecution, she did not give up, even though she was once imprisoned in China. After she came to Australia, she persisted in distributing truth-clarification literature in Chinatown and telling people that Falun Dafa is good.

The Wish of Falun Gong Practitioners in Free Countries: End the Persecution as Quickly as Possible

Ms. Liu Yaqin came to Australia at the end of 2006. Before starting to practice Falun Gong in July 1994 in Dalian City, Liaoning Province, she was known in her work unit as a sickly person. She had many illnesses, including cholecystitus and rheumatic arthritis, and she was known for having a bad temper. After practicing Falun Gong, all of her illnesses were gone. Her husband said that it also improved her temperament. After the CCP's persecution began, she was imprisoned many times, including a two-year period of labor camp imprisonment from 2001 to 2003 in Dalian Labor Camp. She was tortured both physically and mentally. She said that she felt happy to be able to participate in the celebration event. She felt sorrow for her fellow practitioners in China, who are being persecuted. Several of her fellow practitioners who practiced in the same practice site in China are still unlawfully imprisoned. Among them, Ms. Liu Junlu was arrested for explaining the facts about Falun Gong and sentenced to a 12-year prison term. She is being imprisoned in Liaoning Prison and suffered a broken arm as a result of the persecution. Her husband Wang Hongbin and brother-in-law Wang Hongfeng have been missing since being arrested in 2001.