The US Divine Performing Arts revisited Canada and concluded its first performance in Calgary, Alberta at 10:30 p.m. on May 14, 2007. The Southern Alberta Jubilee Auditorium that can accommodate over 2,000 people was fully packed, and over half of the audience was Chinese. Politicians, Chinese community representatives and artists attended the show.

The Divine Performing Arts' global tour received rave reviews from mainstream society in the East and West, from audiences of different nationalities. What made the overseas Chinese the most proud was the connotation of the Divinely-inspired culture that the performances have conveyed. The performance, staged on the evening of May 14 in Calgary, where Chinese accounts for only 100f the population, attracted an audience of which more than half were Chinese, according to the sponsor's coordinator Yang Jiefu.

Beginning over an hour prior to the performance, many audience members came to the theater early. Many came with their whole families, and some came with their friends. They told the reporter that they read in the newspapers that this spectacular performed by Chinese has toured over 30 cities around the world. They felt honored and came because of this fame. Some people said that it is the largest Chinese show staged in Calgary, and they were very pleased to see their own culture be respected.

Joe Wang and Mr. Li joyfully told the reporter that they are Chinese who were born in Canada, and they are 96 years old. They understand Chinese, and when they heard of this show, they felt the show must be very good.

Bob Zhu is a local Chinese who said, "I have been looking for the show for a long time, I bought ten tickets for my family and friends." Bob said he called his friends who were on holiday in Vancouver, and told them to quickly come to Calgary for the performance.

The Divine Performing Arts Touched Hearts of the Audience Members

More than one hundred dignitaries including politicians, Chinese community representatives, and artists attended the VIP reception prior to the performance and watched the show.

The Calgary arts community's most prestigious Epcor Center for the Performing Arts president Colin Jackson said that he was impressed the most by the first performance "Creation." He said, "This is the strongest note (of the show)."

Perhaps influenced by the artistic atmosphere of the family, Jackson's daughter Elizabeth is about to go to New York to study art. Elizabeth said the program "Creation" reveals the origin of art. She said that the moment when the Buddha statues on the stage suddenly lighted up, she felt the spirit. Elizabeth said that she hoped to watch the show once again in Radio City Music Hall in New York.

Mayor of Strathmore, Keith Schneider, said excitedly after watching the show, "Beautiful!" He liked every one of the programs. He said the costumes were so beautiful, performers' performances were spectacular, and the scenes were magnificent. Just as it was introduced, it is the real traditional Chinese cultural performance.

The wife of the mayor said she had been crying all along, because the performance was so beautiful, and it deeply touched her heart. Each performance moved her to tears.

Elena, who works as an accountant at a school, and her husband Ross learned about the show from the web site. After watching the show, they said excitedly that it was an artistic performance different from any other performance they have ever watched.

Elena said that the show was rich in content and amusing. She liked the singing programs the most. For both tenor and soprano, their tonal ranges were very broad and powerful. The English translation of the lyrics was particularly appropriate, containing many spiritual things, such as telling a truth, and coming from higher-level beings, and being closely related to gods.

Elena also noticed that in all dance performances of the show, the performers' hand gestures were very special. She thought they may be hand gestures of Buddhas or Bodhisattvas in Chinese culture. She felt the hand gestures seemed to convey something to you, as if they could talk.

Mark Manns, an architect, said that the show was perfect. He felt every performance gave him the most beautiful thing in the world. Mark said that his favorite was the first program "Creation." He understood that gods reincarnated in the human world, and said that actually the belief in gods is a very good thing. It is a driving force for every one of us to make effort to be a good person.

Wayne Cao, MLA for Fort Calgary said the show was "fantastic, spectacular and world-class." He said he had heard that NTDTV would hold a world Chinese classical dance competition. He wished the competition success.

Connelly said that he was pleased that the Divine Performing Arts brought this performance to the city. On behalf of the mayor of Calgary, city government and all citizens, he warmly welcomed the arrival of the Divine Performing Arts. Calgary is the center of new Western Canada, advocating culture. He hoped the three representatives would accept the gifts, and also hoped that they remember the people in Calgary for their hospitality and enthusiasm.

MLA of Calgary Fort Wayne Cao welcomed the arrival of the Divine Performing Arts on behalf of governor and provincial government. He was also looking forward to watching the performance of high standards.

The Divine Performing Arts' global tour performances aiming at carrying forward traditional Chinese culture were sponsored by NTDTV. From its premiere on January 3, 2007 in Vancouver, Canada, the troupe has toured 32 cities around the world, including Toronto, New York, Washington DC, Paris, Berlin, Tokyo, Taipei, and Seoul. The troupe returned to Canada and will complete its 2007 global tour performances on May 16, in Edmonton, the provincial capital of Alberta.

The President of NTDTV in Canada Dr. Wang Shaojiu said that the Divine Performing Arts' performances in Canada will cover all large cities with populations over one million people. He said that NTDTV commits itself to being a cultural bridge, exchanging between the East and West. The fundamental human natures displayed in the Divine Performing Arts' performances includes good, evil, beauty and ugliness, and forms a bridge that transcends culture, nationalities and language barriers.

While being interviewed, Chumakoe clearly stated that he had learned about the persecution of Falun Gong in China and understood the protesters' request. He said that he would give the protest letter and the Report into Allegations of Organ Harvesting of Falun Gong Practitioners in China and other materials to the ambassador.

Spokesperson for the Canada Falun Dafa Association Zhou Limin told the reporter, "Russian authorities deported a Falun Gong practitioner and UN refugee on 'World Falun Dafa Day,' May 13. This is the second time that the Russian authorities have deported Falun Gong practitioners. We are here to appeal to the Russian government not to follow Jiang's group to participate in the persecution. More importantly, we hope Russia considers its international reputation and makes a right choice for the future of its nation."

Practitioners hoped that Russia, a country that has abandoned communism, could make a right choice at this historic moment when the elimination of the CCP is imminent.

In its letter of protest, the Falun Dafa association expressed its regret at seeing the Russian government cooperate with the CCP to deport practitioners to China, where the persecution of Falun Gong is taking place. The letter asked the Russian government to stop deporting Falun Gong refugees to China and to guarantee their safety in Russia. This, they emphasized, would enable Russia to maintain its international reputation.

Russia signed the 1951 Convention relating to the Status of Refugees. The deportation of Professor Gao violates Articles 32-34 of that convention. Article 32 "Expulsion" stipulates: "The Contracting States shall not expel a refugee lawfully in their territory save on grounds of national security or public order." Article 33 stipulates: "No Contracting State shall expel or return (" refouler") a refugee in any manner whatsoever to the frontiers of territories where his life or freedom would be threatened on account of his race, religion, nationality, membership of a particular social group or political opinion."

Link to the UN's 1951 Convention relating to the Status of Refugees:


Germany: Prior to the Europe-China Human Rights Dialog, Falun Gong Practitioners Hold a Rally in Berlin 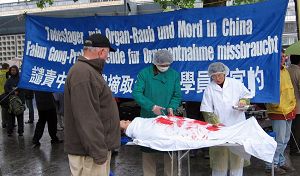 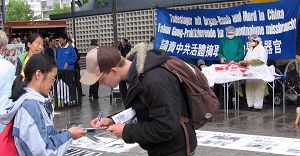 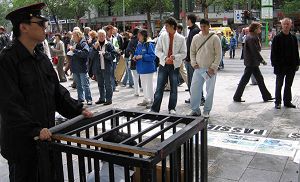 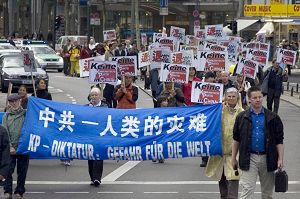 At 12:30, songs by the "Coming for You Choir" marked the beginning of the rally. Representatives from the German International Society for Human Rights, the European Falun Dafa Association, and the human rights group Society for Threatened People then made statements at the rally. Mr. Zhang Zhentong from Leipzig also described how his wife Wang Xiaoyan had experienced unlawful forced labor in China's labor camps, for practicing Falun Gong.

The "Coming for You Choir" consists entirely of Falun Gong practitioners who are fond of music. Formally dressed in white and wearing a solemn expression on their faces, the choir used their unaccompanied voices to sing their classical song "Coming for You," in a quadruple harmony. The performance earned them enthusiastic applause from the audience.

Hubert Koerper, on behalf of the German International Society for Human Rights, delivered a speech at the rally, calling on the EU not to have ineffective talks with China as usual, but instead to carry on a dialog for practical purposes. He commented, "The Europe-China human rights dialog has always been closed-door. I think this kind of situation should not be allowed any longer. Judging from the number persecuted and the brutality of the persecution, China still ranks as the worst for its most serious infringements of human rights and cruelest torturing.

After being informed of the brutal persecution of Falun Gong practitioners in China, passersby felt shocked. A German lady said, "It's so horrible that something like this is still happening."

Michel and his girlfriend, from Spain, attentively viewed the photos of Falun Gong practitioners subjected to brutal torture. The photos showed practitioners being burned by China's police with an iron, or with cigarette butts, and practitioners who were in pain because heated skewers were inserted under their fingernails. Standing in front of the exhibited photos, Michel told the reporter, "Half a century ago, during the World War II, German Nazis employed brutal methods to mistreat the Jews. Nowadays such ill treatment still exists in the world. It's really too brutal."