Washington DC: 1,500 People Hold a Rally and Parade to Support the 12 Million Withdrawals from the CCP

About 1,500 people from around the world held a rally on July 21, 2006 on Lafayette Square opposite the White House in Washington DC. They rallied in support of the 12 million Chinese people who have resigned from the Chinese Communist Party (CCP) and its affiliated organizations. More than a dozen speakers analyzed the inevitable trend of the disintegration of the CCP from different angles, including the persecution of Falun Gong and the organ harvesting from living Falun Gong practitioners. They called on the people of China to quit the CCP and its affiliated associations as soon as possible. Following the rally, the group held a themed parade based on the Nine Commentaries, Quitting the CCP and efforts to end the persecution.

Dr. Liu Zhengdao, dean of the Medical Institute of Natural Healing in San Diego spoke about a report he prepared analyzing organ transplant medical statistics in China. The result of his investigation is the same as the conclusion drawn by the two Canadian investigators, David Kilgour and David Matas, in their recent independent investigation of the organ harvesting allegations. Liu Zhengdao said, "In the past I was always very happy when publishing my report at the medical institute every year, reporting the results of my scientific research, but today, when I published this report, my heart was very heavy. No country is able to arbitrarily kill people for their organs, but the evil CCP is able to do it."

Human rights lawyer Ye Ning said that any regime that commits deeds so evil is doomed to collapse, and must be eliminated. This is the challenge that humanity now faces.

Ye Ning said that engaging in organ trafficking, not only harvesting kidneys, hearts, marrow, skin, corneas, but also setting prices for the live organs and then promoting, advertising, and selling them on the international trade, this is an atrocity that shakes the conscience of humanity.

Mr. Wu Baozhang, former director of the Chinese section of Radio France International (RFI) and a senior journalist, said that the CCP has spent a lot of money and organized much manpower to create its huge propaganda machine to constantly tell lies. If you take a good look at CCP-run newspapers, you will see how good the CCP is at telling lies. During its entire persecution of Falun Gong, the CCP propaganda machine has played its role. Repeating the patterns of past periods of repression, the first thing the CCP does to any group it wants to beat down is to demonize it using its vast propaganda machine encompassing all the newspapers, radio and TV outlets in China. The same was done with Falun Gong.

Chairman of the Global Service Center for Quitting the CCP Gao Dawei said that since the publication of the Nine Commentaries, 12 million Chinese people have renounced the CCP and its affiliated associations.

Wu Baozhang said that the Nine Commentaries has thoroughly broken the mind bondage of the Chinese people imposed upon them by the CCP, triggered the grand tide of millions of people quitting the CCP. The disintegration of the CCP is inevitable.

After the rally, the Global Service Center for Quitting the CCP, together with a hundred groups held a grand parade supporting the 12 million withdrawals. The parade set off from Lafayette Square, marching two miles, passing government organizations, companies, lawyers' offices and other office buildings. People in the parade held banners and display boards while passing out the Nine Commentaries, and telling people about quitting the CCP and the persecution. 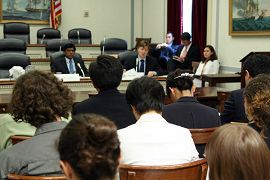 The Persecution Is Still Going on.

Mr. Erping Zhang said, "Today is a special day. On the same day seven years ago, the Chinese regime launched a cruel systematic persecution of Falun Gong. On the same day two years ago, I gave an introduction to the situation of Falun Gong in China to Human Right Caucus. It is regretful there has hardly been any good news in the past two years. The brutal persecution is still going on. On some aspects, it is escalating."

American citizen Mr. Charles Li recounted the physical and mental torture of Falun Gong practitioners based on his three years of personal experience in the CCP's prison.

Hogrefe asked practitioners for suggestions on how the American Congress could help during the briefing.

Dr. Sherry Zhang, CIPFG spokesperson, introduced two powerful ways to stop the persecution of Falun Gong. Both are in progress.

One way is to break the CCP's control and censorship of information and safeguard freedom of information exchange between China and the world. The other is a complete investigation of Chinese forced labor camps, jails, hospitals and related facilities by the CIPFG. The CIPFG was established by the Falun Dafa Association and the Minghui website.

Dr. Zhang said, an internet freedom project was initiated by Falun Gong practitioners seven years ago. It has allowed unfiltered information to reach China, and uncensored information from China to reach the rest of the world. Thirty million internet users in China can browse CCP-blocked websites safely without restriction thanks to this technology. Freedom of information exchange will make the CCP's tricks to slander Falun Gong quit working and make the CCP's genocidal conduct lose efficacy.

Dr. Zhang said the mission of her coalition was to form a joint investigation group with international organizations, governments and media to collect evidence and make independent and direct investigation without intervention in China. The goal was to completely uncover the truth about the Chinese Communist Party's persecution of Falun Gong and stop the brutal persecution that has lasted seven years.

Dr. Zhang said they were encouraged to know that many government officials, attorneys, reporters in Hong Kong, North American, Australia and Europe have joined the coalition.

Mr. Erping Zhang said the world had witnessed Falun Gong practitioners' peaceful resistance to violence in the past seven years. "Every one of us faces a test when such a persecution is imposed on humanity. We will be judged by history on not only what we have done, but also on what we could have done. On seeing the evil, do we choose to ignore it and let it be, or expose the evil and support justice? Let's hope we all make the right choice for the sake of everyone."


Russia: Practitioners Expose the Persecution During the G8 Summit

The G8 summit 2006 was held July 15 to 17 in St. Petersburg, Russia. The heads of the eight countries, USA, Russia, Canada, UK, France, Germany, Japan and Italy, participated in the summit. Other countries like China, India, and Kazakhstan were also invited. Russian Falun Gong practitioners used all kinds of opportunities to expose the brutal persecution of Falun Gong practitioners to people in all circles in the society during the G8 summit.

Practitioners also participated in the Society Forum, an activity permitted by the mayor of St. Petersburg to let the public freely express themselves. The Society Forum was held in a stadium away from downtown. During the forum, practitioners held banners like, "Respected President Putin, please urge Hu Jintao to stop the persecution of Falun Gong." They distributed Nine Commentaries on the Communist Party and materials about the facts of Falun Gong to groups and media which participated in the activity. It aroused intense response from all fields.

Mainstream media from Russia and the world interviewed Falun Gong practitioners. Many people on the spot, including reporters of many media, signed their names to condemn the persecution. On the first day of the Society Forum, July 14, Russia's NTV reported the activity of Society Forum in its news program. It especially praised Falun Gong in the program.

Practitioners met the Mayor of St. Petersburg twice at the forum. The first time, they asked her to pass their open letter to President Putin, asking him to help stop the persecution. She said, "Yes." When meeting her for the second time, practitioners gave her the truth-clarification materials, exposing the CCP's crime of harvesting organs from living Falun Gong practitioners in labor camps and prisons. They asked her to put forward the issue of the persecution at the G8 summit. She agreed.