The largest annual Independence Day parade in the Southeast was held in Atlanta on July 4, and Falun Dafa practitioners were once again invited to participate.

The parade has become an important event in Atlanta, attracting tens of thousands of people every year. According to the introduction by the hosting organizations, this is one of the largest Independence Day parades in the U.S., and it is broadcast live. Last year, when Dafa practitioners were invited to participate for the first time, they deeply impressed the organizers and spectators with their entry. After that parade, the organizers sent a "thank you" letter to the practitioners commending their outstanding performance. Not surprisingly, the practitioners were invited back this year.

The theme of the 45th annual Independence Day parade was, "Celebrating Freedom." Similar to the past, the parade route was more than one mile long, and nearly 100 groups participated. Each float was decorated with mainly red, blue and white colors. Looking from afar, the parade formed a joyful sea of red, white and blue flags.

Though it is extremely hot in Georgia in July, this did not intimidate either the participants or the spectators.

The most outstanding Asian group this year was still Falun Gong. Practitioners from other states drove as much as 8 hours to join the parade. As soon as they arrived, they joined the practice sessions of the waist drum and dance troupes.

The founding principles of America are democracy and freedom, and the Declaration of Independence was signed on July 4. While taking part in this holiday celebration of freedom, practitioners' drumbeats also reminded the public that tens of thousands of practitioners are still being detained in China and they can't enjoy the basic human rights and freedom which are taken for granted by Americans.

The parade lasted about 2 hours, and the practitioners' procession received warm applause continuously along the parade route.

On June 28, 2005, the "Truthfulness, Compassion, Forbearance" International Art Exhibition opened in the European Parliament in Brussels. The exhibition was warmly supported by MEP Mr. Pannella and was organized by the Falun Gong Association Belgium. 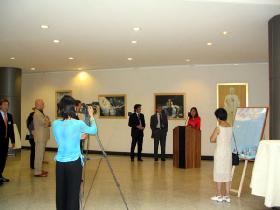 The art exhibition displayed about twenty art works by Western and Chinese artists. It was divided into four themes: "The Beauty of Cultivation," "Uncompromising Courage," "The Call for Justice" and "Justice Prevails."

On the first day of the exhibition, many officials from twenty-five European Union member states and European Parliament staff members came to view the paintings. A lot of them were reluctant to leave. Some came back and viewed the art works several times. Visitors were very moved by the underlying meaning of the paintings and really appreciated them. They were shocked to learn that such a brutal persecution against the peaceful Falun Gong practitioners is being carried out by the Communist Party in China.

Quite a few visitors said that this was the best art exhibition they had seen in the Parliament.

After viewing the paintings, a Portuguese woman who works for an investment fund said that this was a most moving moment for her, and she sincerely hoped that she could help to exhibit these excellent art works in many other countries.

A veteran European Parliament official viewed each painting very carefully. He then came to the assistants at the exhibition and said, "I am really grateful to you for bringing such pure and beautiful art works here. I very much hope that I can do something for the exhibition." He then left a message in the guest book: "Justice will definitely prevail."

At the opening ceremony on the evening of June 28, MEP Mr. Pannella said that he was very happy for the art exhibition to be held in the European Parliament. The art works displayed the courageous efforts by Falun Gong practitioners in calling for freedom of belief. Their efforts are not just for Falun Gong, but also for all the Chinese people who are seeking freedom.

In a speech, Mr. Slatts from the Belgium Falun Gong Association thanked many MEPs for their continuous support of Falun Gong. He hoped that through this exhibition many more people would learn the beauty of Falun Gong and join the worldwide voice condemning the ongoing persecution of Falun Gong in China.

The exhibition was held for three days and successfully concluded on June 30. Practitioners from Holland, France and Germany came to help the Belgian practitioners in setting up exhibition and in explaining the artworks to the visitors.

Violations of basic human rights and the persecution against good people in China violates the laws and regulations, which most countries -- China included -- have ratified to protect the lives of their citizens. The Chinese Communist Party (CCP) has now extended its tentacles of persecution outside of China.

The latest example in Finland was the harassing phone calls of the past spring, when contact persons for Falun Gong in several areas received disturbing and threatening phone calls repeating the evil anti-Falun Gong propaganda from the CCP. The international community should help the investigations in order to have the culprits behind the act identified.

Local police in Finland, as well as the media, have now verified that some of the harassing calls targeting Falun Gong practitioners in the spring came from Mainland China.

Local police officers, who investigated the case in Finland, said that some of the calls were traced back to China. The newspaper Kaleva mentioned in an article that Chinese Internet operators have blocked the condolences, prayers and other comments on the Internet regarding the death of the Pope John-Paul in the Vatican. The CCP is known for its strict control of people's lives using all means.

Kaleva has followed up on the case of the harassing calls to Falun Gong practitioners in Finland by reporting about it repeatedly. The newspaper said in its article that some of the calls came from China. In China, practitioners of Falun Gong have been in grave danger, and now their lives and domestic peace are being sabotaged outside of China too.

If you ask the police in Beijing about this matter, they would probably deny everything. Other authorities, for example from the 610 Office, which is orchestrating the whole persecution of Falun Gong in China, would give the same answer. But why would ordinary Chinese people make thousands of harassing calls to Finland defaming Falun Gong and repeating the CCP's evil propaganda? It is quite obvious that this activity is at least sponsored by the Chinese Government.