Philadelphia, U.S.: Practitioners Clarify the Truth of the Persecution at Live8 Concert

To call on the G8 leaders to help Africa reduce poverty, the Live8 concerts were held in 9 cities in 4 continents. Through TV, radio, the internet, and cell phones, it was estimated that several billion people listened to the concerts. 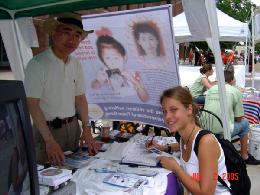 Practitioners came to the site to set up at as early as 5am. Soon, streams of visitors came to the concert site. There were many booths that gave out all kinds of gifts for free such as T-shirts, drinks, etc.

However, many people came to the Falun Gong booth to sign the practitioners' petition, request materials and watch a video program about rescuing orphans of Chinese Falun Gong practitioners.

Many people with predestined relationships said: This [Falun Gong] is the treasure that I have been looking for. Where are the practice sites?

A German international student visited Mainland China last year. She asked a practitioner who once studied in Germany many questions about Falun Gong. The practitioner talked with her in German. The girl stayed a long time after she signed the petition calling for action to rescue the orphans of Chinese practitioners. Some visitors also said loudly: "Falun Dafa is Good!"

When the practitioners applied to participate in the parade, the application deadline had already passed. But because of the practitioners' impressive performance last year, a special exception was made for the Falun Gong group. At the time of a preparatory meeting with the parade organizers, all the practitioners were at the Chicago Experience Sharing Conference. In order to support Falun Gong, a practitioner's husband (who doesn't practice Falun Gong) volunteered to attend the meeting and represent the group.

On the morning of July 4th, when the practitioners were decorating the float, people from other groups and the parade organizers came by and wanted to know more about Falun Gong. They wanted to know what Falun Gong is and they asked about the persecution of Falun Gong in China. When they left, they took many truth-clarification flyers. Some said that they would come to the practice site to learn the exercises.

The parade started. In the Falun Gong procession, four women practitioners dressed in beautiful orange, yellow, green and pink Tang Dynasty costumes presented the spectators with a graceful elegance. Along the parade route, people applauded and cheered when the Falun Gong procession passed by. Comments such as, "So beautiful!" "I like it!" "Pretty float!" "I like that music!" or "Great! Falun Gong!" were heard. Falun Gong is no longer a stranger to many of the spectators and they greeted the practitioners as friends. Some children pressed their hands together in greeting. 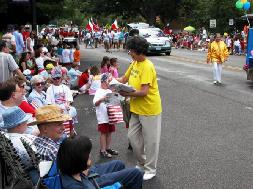 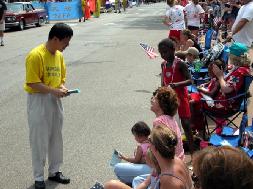 People took flyers and asked questions about Falun Gong. 1,200 flyers ran out quickly, before the parade was even halfway finished. The practitioners felt regret for the spectators who didn't have the chance to read the truth-clarification materials, but they explained the facts to them briefly.

The parade finished successfully. The practitioners were very happy that they brought a special gift, the beauty of Falun Dafa and the truth of the persecution in China, to the people at the Independence Day parade.

After Chen Yonglin, senior diplomat from the Chinese Consulate in Sydney, Australia and Hao Fengjun, a police officer with the Tianjin City 610 Office, resigned from the Chinese Communist Party, Han Guangsheng, the former head of the Shenyang City Judicial Bureau and the deputy head of the Shenyang City Police Department in Liaoning Province recently brought to light some inside facts about the persecution of Falun Gong by the CCP.

Han Guangsheng said that the 610 Office name originates from its founding date, June 10. The central 610 Office was founded on June 10, 1999. Local offices have varying names such as "611 Office" or "621 Office." The local offices were established at different times as their names reflect, but their organization and mission are essentially the same. They are under the jurisdiction of the Central Party Committee, and members of the 610 Office come from the police department, the Procuratorate, the courts and the Judicial Bureau. These offices specialize in the persecution of Falun Gong and exist outside of the law. They have power over local government departments and bureaus.

In Shenyang City, the deputy secretary of the Shenyang City Political and Judiciary Committee is in charge of the "611 Office." The Municipal Party Office and several members of the Political and Judiciary Committee take care of the daily affairs of the office. The police departments, the Procuratorate, the courts, the National Security Bureau and the Civil Administration Bureau are member units of the "611 Office." The "611 Office" often passes down orders from government departments on a higher level and arranges political assignments in Shenyang City. Those include three areas of responsibility: First, arrest Falun Gong practitioners who go to Beijing to appeal; second, detain and reform Falun Gong practitioners; third, sentence Falun Gong practitioners to forced labor or prison.

The "611 Office" often holds meetings that require attendance from not only its member units, but also from the district and county government departments. The most important assignment is preventing Falun Gong practitioners from going to Beijing to appeal. All central to local governmental levels have caps that stipulate the maximum number of practitioners who go to appeal before punitive actions are taken against the responsible government officials.

According to Han Guangsheng, the 610 Office does not have any published official documents, but the heads of the office give their words as direction for action. In China, the officials' words are documented and used as official documents. There are also situation notices, which include summaries of the current situation, and also directives.

Most of the orders are orally communicated. There are two parts to the assignments. The first part is arranged by the city Party committee, which issues the requirements to be met. The Liaoning Province Judicial Bureau makes administrative arrangements and exchanges "tips" on the persecution. It holds meetings, and the officials give speeches to plan the persecution. To illustrate the concept of caps, if three or more Falun Gong practitioners from Shenyang City go to Beijing to appeal in one month, the deputy secretary of the Shenyang City Party Committee and even the secretary would have to go to the provincial government and engage in self-criticism. To keep their posts and to "save face," the city officials use a large portion of its police manpower and financial resources to intercept Falun Gong practitioners who go to Beijing to appeal. The cap for Shenyang City is three. The head of one town government was removed from his post because one Falun Gong practitioner from his town went repeatedly to Beijing to appeal.

The Judicial System Participates in the Persecution of Falun Gong

According to Han Guangsheng, he had several major responsibilities as head of the Judicial Bureau, including upholding the legal system, legal education, and overseeing lawyers, notarizations and city-level prisons and labor camps. There were four labor camps in Shenyang City, three of which held Falun Gong practitioners. Between 1999 and 2001 when he left for Canada, between four and five hundred practitioners were held at the forced labor camps.

Han Guangsheng said that due to orders from the central government, at first only the police participated in persecuting Falun Gong and the judicial system did not take part in it. The number of detained Falun Gong practitioners, however, exceeded the custody centers' and the detention centers' capacity controlled by the police system. The deputy secretary of the Shenyang City Party Committee at the time came to Han Guangsheng and asked him to assign a labor camp to detain Falun Gong practitioners.

Han Guangsheng told the guards to give them pen and paper and asked them to document these incidents. Several days later Han Guangsheng turned the practitioners' documentation, along with his own note, over to the head of Liaoning Province Judicial Bureau who, as a result, took a disliking to Han Guangsheng.

Han Guangsheng said he read online that a Falun Gong practitioner named Gao Rongrong had suffered facial disfigurement from electric shock by the police, and that she was tortured to death on June 16. He was shocked by the news because it happened at the Longshan Forced Labor Camp, formerly under his supervision. Although it took place after he left China, he said that he believed this type of incident is highly likely to have taken place.