France: Promoting Falun Gong and Raising Awareness about the Persecution in Northern Paris 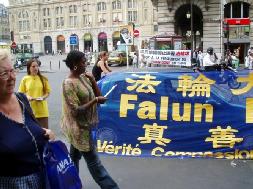 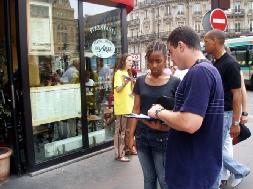 This area is a business district on the northern shore of the River Seine. The Gare Saint-Lazare rail station, the Conservatoire of Paris, and a number of musical instruments shops are located at the north side of the square. On the south side, there is the famous Paris Opera and large shopping malls such as La Fayette and Printemps. These geographical features help the area attract many local residents, as well as tourists from all over the world. Throngs of people got the chance to learn about Falun Gong at this activity.

The weather in France at the end of June is very hot, but it did not hinder Falun Gong practitioners' steadfast righteous thoughts. Practitioners hung up truth clarification banners on the roadside, and voices seeking justice could be heard clearly among the crowds of people. The music "Pu Du" and "Ji Shi" accompanying Falun Gong practitioners' compassionate righteous thoughts sent blessings of the truth about Falun Gong to the people. The Chinese Communist Party's (CCP) persecution of Falun Gong and Ms. Gao Rongrong's disfigurement and death by torture once again became the focus of people's conversations. Many people approached practitioners on their own initiative to sign their names on a petition calling for an end to the persecution, and sometimes there was even a line of people waiting. 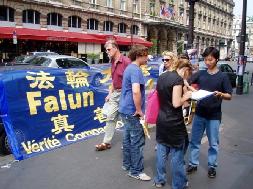 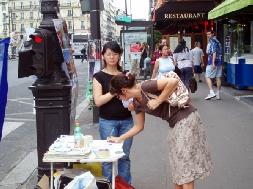 During the activity, practitioners unexpectedly met a freelance writer who regularly submits articles to the mainstream French media. After learning the truth about Falun Gong, she wanted to help bring an end to the persecution. She took many leaflets with her and said that she hoped we would hold more of these kinds of activities. Practitioners told her that we have been holding peaceful appeals in front of the Chinese Embassy, and she said she had heard about it and was glad we could do so. Before leaving, she patted a practitioner's shoulder enthusiastically and said, "Bon courage!"