Belgium: Rallying at the Chinese Embassy for Those Who Murdered Gao Rongrong to be Brought to Justice

Practitioners from different Belgian cities participated in the activities and some even came over from Holland. Throughout the afternoon, the practitioners demonstrated the Falun Gong exercises. From time to time, passing-by vehicles honked their horns to show their support for the protest.

The activity also received positive support from local police. The police granted special permission in a very short time after they received the practitioners' application to hold the activity. The police on duty at the embassy had also learned about Gao Rongrong being tortured to death and many other cases of persecution. A policeman earnestly read the French version of the "Nine Commentaries on the Communist Party" (a document listing the CCP's crimes and published by newspaper The Epoch Times) and another policeman expressed that he would definitely study the "Nine Commentaries" carefully to further understand the evil nature of the CCP.

These inside stories exposed by Mr. Chen Yonglin about how the Australian government sacrifices the rights of the Australian people and of other groups under the Chinese Communist Party's (CCP's) pressure aroused great attention toward the persecution of Falun Gong during the Australia-China Human Rights Dialogue. Despite heavy wind and rain while the press conference was held, the press conference regarding the lawsuit for upholding human rights attracted several media outlets including Channel 9, SBS TV, 2GB radio, the Epoch Times and NTDTV.

After holding an art exhibition in Germany upon invitation from the Hessen Cultural Department, Chinese artist Ms. Zhang Cuiying, who had just returned to Australia, attended the press conference. She said that the Chinese communist regime not only implements state-sanctioned terrorism in China, but it also exports the terrorism to other countries to infringe upon people's basic rights. As an Australian citizen, Ms. Zhang went back to China in 1999, where she was arrested, imprisoned and tortured both physically and mentally simply because she believes in Truthfulness, Compassion and Forbearance, the principles of Falun Gong. After Ms. Zhang came back to Australia, the Chinese communist regime continued to threaten her on Australian soil. Her home phone has been monitored and Chinese spies punctured her car tires several times and threw eggs at her house. When she filed a lawsuit in the New South Wales Supreme Court, Chinese spies even threw a bloody dead cat at her door in order to threaten her. Ms. Zhang said that none of this intimidation could prevent her from upholding justice.

However, what seems inconceivable to her is that the Australian Foreign Minister, who is from a western democratic country, stands on the side of the evil Chinese Communist Party. He has continuously signed certificates, for 39 consecutive months, to restrict Falun Gong practitioners from holding peaceful appeals in front of the Chinese Embassy. She believes that Foreign Minister Downer's unwise actions are causing all people who enjoy freedom and democracy to feel ashamed. Hence, with help from Australian attorney Mr. Bernard Collaery, Ms. Zhang and Australian practitioner Ms. Jane Dai filed a lawsuit against Minister Downer in the Canberra Territory's Supreme Court on June 8.

Ms. Zhang said that when she was in Germany, she learned that Mr. Chen Yonglin exposed inside stories about how the Australian Foreign Ministry helped the Chinese Communist regime to intervene with the lawsuit she filed against Jiang Zemin and the 610 Office. This shocking news led her to realize the seriousness of the issue. She hoped that the Australian government and major media outlets would investigate what Mr. Chen Yonglin claimed and expose the manipulator behind the scenes, so as to protect Australian people and ensure for them a free, safe, and peaceful environment in which to live.

Finally, Ms. Zhang expressed her wish that the Australia-China Human Rights Dialogue could really help improve the human rights status of people in China. She hoped that the Australian government would put human rights, justice and conscience before trade interests. She hoped that the government would not only help stop the Chinese communist regime's espionage activities in Australia, but also help stop the brutal persecution of Falun Gong in China. 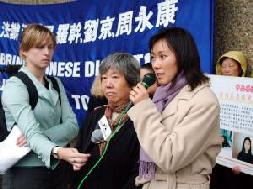 Sydney Falun Gong practitioner Ms. Wang Juan and her mother, who was imprisoned for 3 years in a labor camp because of her practice of Falun Gong.

New South Wales Falun Dafa Association spokesperson Mr. John Deller, representative from the Global Coalition to Bring Jiang to Justice (GCBJJ) Jennifer Zeng, Professor of Law Yuan Hongbing, Sydney Falun Gong practitioner Wang Juan and her mother who recently fled from China to Australia, also addressed the press conference. They related facts from different aspects about how the Chinese communist regime wantonly violated human rights and cruelly persecuted common citizens. Among them, because of her practice of Falun Gong, Ms. Wang Juan's mother was unlawfully imprisoned in a forced labor camp for three years, where she suffered all kinds of physical and mental torture. Recently, she fled from China to Australia. Ms. Wang Juan's elder sister is also imprisoned in a labor camp for practicing Falun Gong. Representative of GCBJJ Ms. Jennifer Zeng pointed out that the lawsuit filed by Ms. Zhang Cuiying against former Chinese president Jiang Zemin is one of the 47 lawsuits filed in more than 30 countries aiming at the persecution of Falun Gong. These lawsuits filed across the world against Jiang Zemin and other chief perpetrators in the persecution of Falun Gong have become the largest-scale human rights legal action since the lawsuits against Nazi war criminals.

It is reported that Australian citizen Ms. Zhang Cuiying filed a lawsuit against former President of China Jiang Zemin and the 610 Office for persecuting Falun Gong practitioners to the New South Wales Supreme Court on September 15, 2004. On December 10, 2004 and February 28, 2005, the NSW Supreme court held two hearings, but the defendants did not appear in court. The lawsuit is currently underway in the NSW Supreme Court.

It is reported that the lawsuit filed by Ms. Zhang Cuiying against a former state leader is the first of its kind in the history of law in Australia. From the position of the defendant, the case is unprecedented in Australian history. The lawsuit caused a strong stir among high-ranking officials in Australia and China. One of the most influential newspapers, The Australian, published a report entitled, "Lawsuit strains China ties" in November 2004, which for the first time exposed the diplomatic uproar in the Chinese Foreign Ministry and Chinese Embassy in Canberra about the lawsuit. They attempted to dismiss the lawsuit through diplomatic means. A spokesperson from the Australian Ministry of Foreign Affairs in an interview with The Epoch Times confirmed that China was extremely concerned about the lawsuit. Australian ambassador to China Alan Thomas has been called on the carpet to the Chinese Foreign Ministry in Beijing on several occasions since Ms. Zhang filed a statement of claim with the court. China's Ambassador to Australia Fu Ying has repeatedly visited the Department of Foreign Affairs and Trade in Canberra to express concern over the case, raising the issue at various levels of the government.

The Australia-China Human Rights Dialogue this year is the ninth series of talks between the two countries about human rights. It is reported that during the dialogue, Australia will increase its human rights fund to China to 1.8 million dollars, an amount more than twice the initial commitment, to help China improve its human rights situation. However, the Chinese authorities exerted pressure on the Australian government and demanded that the Australian government restrict Falun Gong practitioners' peaceful appeals in front of the Chinese Embassy and Consulates in Australia. People could not help but worry that if this trend continues, the freedom of Australian citizens and other groups will eventually be infringed upon by the Chinese Communist regime. In addition, people not included in the dialogue questioned the actual effect of the dialogue, as it is always carried out behind closed doors each year. In particular, Mr. Chen Yonglin revealed that the Australia-China Dialogues have been only a formality, which has not brought about any substantial developments or improvement over the past few years. Many people were concerned as to whether the Chinese communist government would use the funds provided by the Australian government to continue to suppress Falun Gong practitioners and other groups instead of actually improving its human rights record.