On June 6, the Service Center for Quitting the Chinese Communist Party (CCP) in Malaysia held a rally in Kuala Lumpur to support 55 million Chinese withdrawals from the CCP. 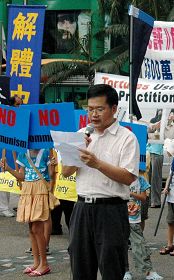 Mr. Peng from the service center is giving a speech. 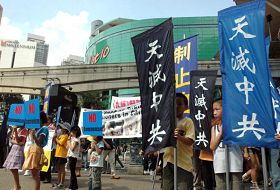 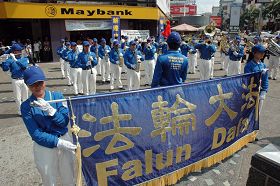 The Divine Land Marching Band participates in the march. 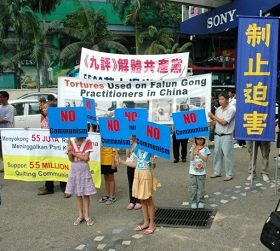 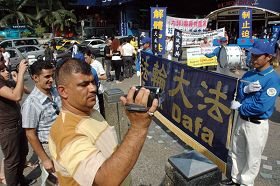 Tourists take video and photo of the rally.

The rally started at 3:00 p.m., with the Divine Land Marching Band coming to support the activity. The volunteers from the service center opened banners with messages in Malaysian, Chinese and English. They also displayed photos to expose the evil history of the CCP. Mr Peng, a representative of the center, read an announcement, which pointed out the evil nature of the CCP and called upon people to help stop the persecution of Falun Gong.

Malaysia, as a country, is against the communism. The government recently publicly announced that the spreading of communism in Malaysia is not allowed. So, many people supported the rally. The photos, which exposed the brutal persecution of Falun Gong, shocked the people. Many of them took pictures and videos of the rally.

Johanna Maria Glauser, an artist from South Africa, was attracted to the band's performances. She and her husband liked the music and praised the band as professional. She and her husband were shocked by the CCP's harvesting organs from living Falun Gong practitioners. They condemned the persecution.