February 9, 2009, was the Lantern Festival (January 15 on the lunar calendar). Residents gathered at the Bright Eight in Port Kelang and celebrated the festival with traditional lanterns, oranges, and fireworks. Composed of Falun Dafa practitioners, the Divine Land Marching Band and Celestial Maiden Dance Team debuted at the celebration and gave residents a surprise. 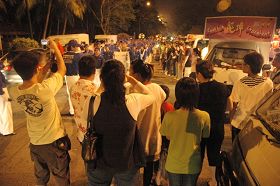 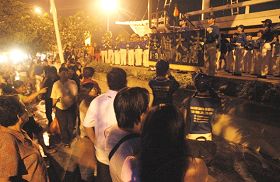 The band attracted many spectators. 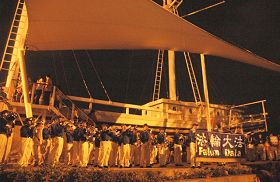 The band performed at the Bright Eight in Port Kelang, Malaysia.

At 9 p.m. Divine Land Marching Band arrived at the site and performed nonstop for one hour of music. Their selections included "Falun Dafa Is Good," "Drums and Trumpets Shake the World in Ten Directions," "Fa Rectifies the Heaven and Earth," "Dispatching the Treasure," and "Ode to Joy." The music attracted many people to watch and take photos. People asked for truth-clarification materials to learn more about Falun Dafa. The Celestial Maiden Dancers also distributed many truth-clarifying bookmarks with little origami lotus flowers attached.

This is the first time for Divine Land Marching Band to perform at the Lantern Festival in Malaysia. The spectators were happy to see the marching band and said the performance was very good.