To celebrate the Chinese New Year, Malaysian Falun Dafa practitioners' Divine Land Marching Band performed in the lobby of Malay-China Shopping Center on the afternoon of January 18, 2009. The performance attracted many shoppers. Practitioners clarified the truth to the Chinese who stopped to watch and other local residents. 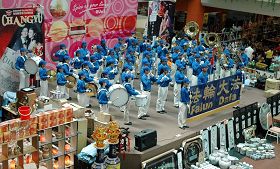 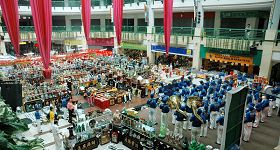 Many Chinese businessmen do business in Malay-China Shopping Center. While visiting a foreign country to do business, they had a rare chance to see a performance by the Divine Land Marching Band. The band performed "Falun Dafa Is Good," "Drums and Trumpets Shake the World in Ten Directions," "The Fa Rectifies the Cosmos," "Presenting the Treasures," and "Ode to Joy."