(Clearwisdom.net) I first met Mr. Yu Zhou and his wife, Ms. Xu Na, on a mild winter afternoon. Both wore simple but unique winter jackets, standing gracefully next to each other in complete accord. 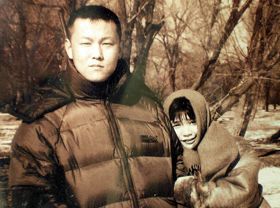 Ms. Xu Na had just been released from the Beijing Women's Prison several months prior. She was thin, but her eyes were bright. I knew some of suffering she had gone through during her five years in prison, and I tried to inquire into some of her experiences without recalling too much of her suffering. Instead of talking about herself, she revealed how practitioner Dong Cui had been tortured to death at the prison. We talked about many things, from the wide dissemination of Dafa in China prior to 1999, to the persecution of many familiar practitioners after the evil regime's oppression began. Ms. Xu also spoke of practitioner Mr. Cao Dong and his wife, Yang Xiaojing, from Gansu Province, who was imprisoned for meeting with the vice president of the European Parliament. Ms. Xu said, "They gave me a lot of help in cultivation. After the persecution began, because we were constantly being detained, it became difficult to get together with them again."

Mr. Yu Zhou listened intently during the conversation and made a comment now and then. He talked most about his father-in-law, Xu Na's father. The couple lived with Xu Na's parents, who always worried about her. Yu Zhou told his wife, "During the five years you were detained, your parents suffered terribly. It was hard for them." Xu Na said because she was very determined in her belief during those years, the prison warden and team leaders did not inform her family about her for a long time, just to torment them. Her father suffered as a result and worried that Xu Na might die. After her release from prison, officials from the Beijing Prison Management Bureau and from the 610 Office constantly harassed her family. They also urged collaborator Yao to call Ms. Xu, trying to get information from her. Xu Na's family was not allowed to live in peace.

Later we met again. We treasured the opportunity of practitioners getting together. Yu Zhou was most interested to discover how to effectively clarify the truth face to face in order to help more people understand the truth. He was active in distributing truth clarification materials in residential buildings. This also gave him opportunities for direct contact with more people. He always hoped to do better explaining the truth face to face. Dafa practitioners' hearts are made of gold. Men or women, young or old, no matter what their social positions are, they use the power Dafa gives them to save more people.

Ms. Xu Na is a renowned painter. During her imprisonment, a Taiwan businessman bought all of her paintings. Some of them were published as illustrations in books. Xu Na was eventually accepted as a graduate student in the Painting Department of the Central Arts College. Her professors and many people in the industry praised her artistic talent. She said, "It is Dafa that makes me physically and mentally pure and righteous. Dafa makes my artistic creations have more depth."

Yu Zhou, a musician, declared his outstanding admiration for the yearly Divine Performing Arts Spectacular and wished he could have the opportunity to be part of the sacred performance. "If there is a need for me to join, I can let go of anything for that." Sadly and regrettably, Yu Zhou did not get an opportunity to see the DVD of the Divine Performing Arts 2008 Spectacular. He was tortured to death by the Communist regime on the eve of the Chinese New Year. According to the report (http://www.clearwisdom.net/emh/articles/2008/3/19/95478.html), on January 26, 2008, police blocked Yu Zhou and Xu Na's vehicle on their way home, arrested them, and took them directly to the Tongzhou District Detention Center. On February 6, 2008, their family received notice to come quickly to visit Mr. Yu in the Qinghe Emergency Center. When his family got there Mr. Yu, age 42, was already dead, and his body was covered with a white sheet. An oxygen mask was still on his face, but his legs were icy cold. The detention center authorities refused to let his wife, Ms. Xu Na, attend his funeral.

This was such debilitating, sad news for Yu Zhou and Xu Na's parents, their relatives and friends, and Yu Zhou's fans. The regime had killed another kind person, a Dafa practitioner, who believed in the principles of "Truthfulness-Compassion-Tolerance."

It was one of several well-planned operations to persecute Dafa practitioners under the pretext of ensuring "stability for the Olympics." Prior to Yu Zhou and Xu Na's arrest, she said certain people from the Beijing Prison Management Bureau and from the 610 Office had called her parents' house and then called her. They demanded to speak with her, but she refused. According to inside information from the Beijing Women's Prison, after the information about practitioner Dong Cui's torture death was published on the Internet, prison officials suspected Xu Na had leaked the information. Plainclothes agents had followed Xu Na several days prior to their arrests.

The kind and talented Yu Zhou is now dead. His wife, Xu Na, is still being held in Chongwen District Detention Center in Beijing.