Malaysia: A Rally and Parade to Support the 38 Million Chinese That Have Quit the CCP and Its Affiliated Organizations and to Condemn the CCP 's Reprehensible Behavior in Flushing, NY (Photos)

The Malaysia Quit the Chinese Communist Party Service Center held a rally and parade in Queens Park in Kuala Lumpur, Malaysia, in support of the 38 million brave Chinese who have quit the CCP and its affiliated organizations. They also condemned the CCP's violent attacks against Falun Gong practitioners in Flushing, NY. They wanted to inform the local people about the current popular movement to withdraw from the CCP and help them to see clearly the its tactic of shifting attention away from the recent national disaster in China by framing Falun Gong and inciting hatred. 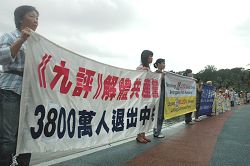 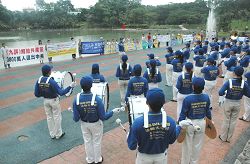 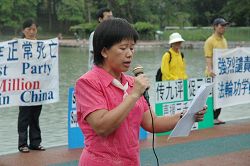 Spokesperson for the Malaysia Quit the CCP Service Center Ms. Chen strongly condemned the CCP at the rally 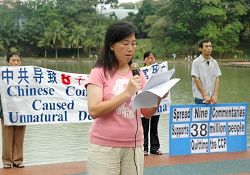 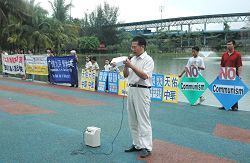 Mr. Chen from China expressed his support at the rally 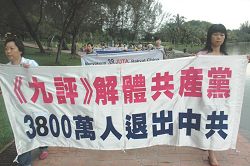 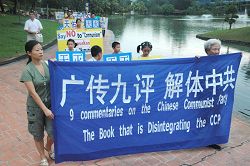 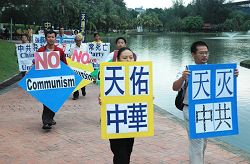 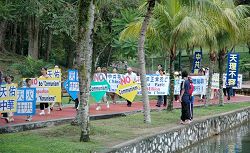 A parade in support of quitting the CCP 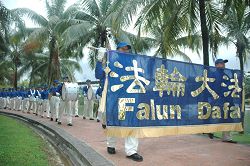 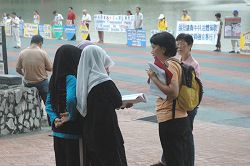 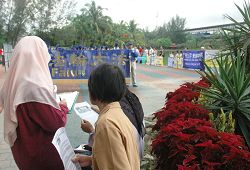 The rally in support of 38 million Chinese people who have quit the CCP and its affiliated organizations began in the afternoon. The attendees first observed a one-minute silent tribute for the victims of the May 12 Sichun earthquake.

The Malaysia Quit the CCP Service Center strongly condemned the CCP. Spokesperson Ms. Chen said, "The Malaysia Quit the CCP Service expresses its support for the "Quit the CCP" service centers in Flushing and other places that were subjected to CCP harassment and assaults. At the same time, we strongly condemn the scoundrel deeds orchestrated by Zhou Yongkang, the Chinese consulates, and CCP special agents. In order to shift the attention of the outside world from focusing on the CCP's cover-up of earthquake predictions and its failure to rescue more people in the first 72 hours after the disaster, the CCP took advantage of the calamity to frame and incite hatred against Falun Gong under the pretext of disaster relief. It seeks to justify its rule and the persecution of Falun Gong."

Ms. Situ, a citizen of Kuala Lumpur said, "Both the Tangshan earthquake and the Wenchun earthquake, fully exposed the CCP attitude of taking lives for granted and its extreme selfishness. The Nine Commentaries on the Communist Party stated, 'Chinese people need self-salvation, self-reflection and breaking away from the Communist Party.' That is very reasonable."

Ms. Situ called on everybody to read the Nine Commentaries. Since the book was published in 2004, more than 38 million Chinese people have quit the CCP and its affiliated organizations. This peaceful, drive will encourage more people to reflect on: What is the Chinese Communist Party? Why has it persecuted Chinese people again and again? Why have I remained silence in the face of its repeated persecution of Chinese people? Ms. Situ hopes that more people will quit the CCP organizations after seeing clearly the real nature of the CCP and after have read the Nine Commentaries.

Mr. Chen from China also attended the rally and expressed his support. He said, "Nineteen years ago, the CCP used guns and tanks to massacre young students and citizens in Tiananmen Square in Beijing. Nineteen years later, in front of the Flushing Public Library in New York, the CCP hired a large crowd of people to verbally abuse, spit upon, and hit volunteers working at the "Quit the CCP" service centers. Those mobs yelled and kept passersby from taking The Epoch Times newspaper."

Mr. Chen concluded, "Land reform, the Three Antis Movement, the Five Antis Movement, the Anti-rightists, the Cultural Revolution, the June 4 Massacre, and the Persecution of Falun Gong--one after the other, the CCP has killed so many innocent lives. It is clear to us that without the CCP, there will be a New China; without the CCP, there will be a True Future for China."

The service center displayed photo boards illustrating the Nine Commentaries and handed out information and copies of the Nine Commentaries. After having learned that the CCP has not only persecuted Falun Gong, but also removed organs from living Falun Gong practitioners for profit, many people signed the petition to call for an end to the persecution.

The Divine Land Marching Band made its appearance to add energy and express support for the event. Its performance attracted the attention of many citizens.