The Malaysia International Trade & Consumer Fair was held in Malaysia International Exhibition & Convention Center (MIECC) from December 3 to 7, 2008. The fair was hosted by the Chinese Chamber of Commerce and Industry of Kuala Lumpur & Selangor. Prime Minister of Malaysia Datuk Seri Abdullah Ahmad Badawi was present in the fair at 11 a.m. on December 4 and hosted the opening ceremony. He accepted Falun Gong books presented by Broad Press Inc. when visiting the booths at the fair. 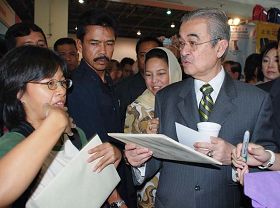 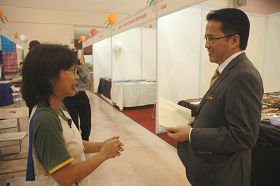 A Chinese book exhibition was included in this fair. Broad Press Inc. dispatched representatives to present books to the prime minister and his wife Datin Seri Jeane Abdullah. Ms. Hsie told the prime minister and his wife a little about Falun Gong. She presented them with books and DVDs on Falun Gong. She also gave them information on the Chinese Communist Party (CCP)'s persecution of Falun Gong. Prime Minister Badawi smiled and shook hands with Ms. Hsie to thank her.

Deputy Minister Datuk Liew Vui Keong of the Ministry of International Trade & Industry went to the fair in the afternoon. Ms. Hsie also presented books on Falun Gong to him, and told him about Falun Gong and the CCP's persecution.

Malaysia International Trade & Consumer Fair was first held in 1988. It is the seventh one this year. It is the biggest expo in Malaysia.