The Malaysian Falun Dafa Cultivation Experience Sharing Conference was held on December 7, 2008 in Kompleks Tabung Haji, a city in northern Malaysia. Practitioners from across Malaysia and Singapore attended the conference. 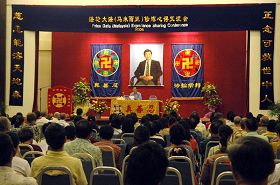 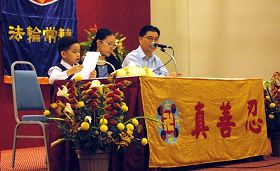 A practitioner's family of three share their cultivation experiences 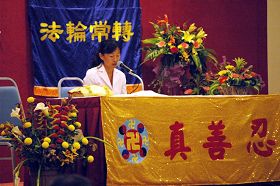 A practitioner shares her cultivation experiences

Twenty practitioners shared their cultivation experiences, understanding and insights with the audience. Most of them spoke about their experiences of clarifying the facts about Falun Gong to Chinese tourists and local Chinese at a tourist site. They also discussed how they improved their xinxing while confronting people who were irrational and overbearing, and made efforts to help more people learn the truth.

Clarifying the facts at a tourist spot

Ms. Li told about her experience with a rude tour guide. She said that the tour guide attempted to snatch materials from her hand, and prevented her from explaining the facts to Chinese tourists. He went so far as to slap her face. Ms. Li said to the tour guide, "Thank you." The tour guide was dumbfounded and stopped his rude behavior. Though having done what a practitioner is supposed to do, Ms. Li did not fight back or swear back, and she still looked within to find her own deficiencies.

Chinese practitioners who do truth-clarification work at the tourist spot sometimes have problems with the Malaysian police. Despite the language barrier, they managed to break through their human notions and fear, and use righteous thoughts to have the police officers learn the facts about Falun Gong. Ms. Tan shared her experience in this regard. She said that she studies the Fa, sends forth righteous thoughts and does the exercises on a daily basis no matter how busy she is. Studying the Fa and clarifying the facts helped her get rid of much fear, and also formed a solid foundation for her cultivation.

Ms. Huang from the Selangor-Kuala Lumpur area discussed the importance of the one body of practitioners. She recounted that during a recent activity, practitioners in the entire area let go of their ego for the first time and actively cooperated and participated in a certain activity. That day, it rained all the way until they reached the activity venue. During the activity, although it was still overcast, not a single raindrop fell. The activity turned out to be successful.

Ms. Zhuo from the same area as Ms. Huang spoke about her experience preparing to host the Divine Performing Arts performance in Malaysia early this year. She said that she found out many of her attachments in the process. She realized that regardless of whether it was hosting Divine Performing Arts performance, taking part in the global "Million Signatures" campaign, or other truth-clarification projects, of major importance is clarifying the facts to high-ranking officials. She feels that they have not done enough in this regard for a long time.

Falun Gong practitioners' cultivation state reflects in their family life and work. Several practitioners shared how they harmonize their work and life through cultivation.

Mr. Cai from Malacca talked about how he realized that he should rationally validate the Fa, but not validate himself. Everybody is making use of their own strengths and according to their practical situation, is working to harmonize the one body, and validate the Fa well no matter where they go. He took stock of his own situation and did well in his work, and at the same time, took part in projects that require more practitioners' cooperation. He tried to go to the tourist site after work to clarify the facts and distribute the Nine Commentaries on the Communist Party. After he placed the base point correctly, the environment became harmonious.

Mr. Luo's family of three shared with the audience how Dafa has changed his family. Several months after he began practicing Falun Gong, Mr. Luo's SGPT that has bothered him for several years miraculously dropped from 146 IU/L to normal state 40 IU/L. Mrs. Luo spoke about how her cultivation was reflected in her work. Her boss noticed that she was diligent in her work, and one day he gave her some good news: the company management decided to let her take Master-degree courses which was what she had been yearning for, and the company would pay her tuition. But she declined the offer, because she thought she should give the opportunity to other colleagues. The couple's seven-year-old son has been practicing Falun Gong for over two years, and he has also learned that Falun Dafa teaches people to cultivate Truthfulness-Compassion-Forbearance. He said he wants to remember Truthfulness-Compassion-Forbearance all the time.

Ms. Chen's husband was hot-tempered. They lived in a big family and the relationships between family members were complicated. She accumulated all kinds of fear from living under pressure for over 30 years. She realized that she should attach great importance to Fa-study, so that she would be aware of what she should do in conflicts. She said, "One day, when my husband beat and swore at me, I asked him why he beat me. I said, 'You've often beat me in the past 30 years, but I won't fight back any more. I want to be a good person.' Later, my husband even poured hot water on me, but unexpectedly, the water was cold. I was quite calm at the time, but my husband was scared; he dared not speak a word, and kept silent for three days." Ms. Chen said she found that her environment has changed greatly since that incident, and she also noticed that her fear was no longer there.

After the conference concluded, practitioners held a big group sharing in the evening. Many practitioners said they benefited a lot from the Fa conference. In comparing with other practitioners, they found out where they fell short and were inspired to do better and continue striving forward.