A Minghui correspondent has reported that blooming Udumbara flowers were found in the northern California city of Fremont on August 8, 2007. According to legend, this flower blossoms once every 3,000 years. This is the first North American sighting after they were spotted in Korea, Australia, Mainland China, Hong Kong, and Taiwan. Amazing flower recorded in Buddhist scriptures 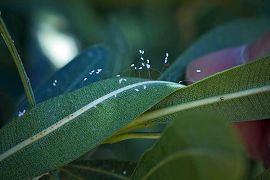 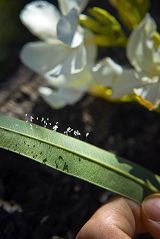 At around 8:00 a.m. on August 8, 2007, Ms. Lisa Wei; her daughter, Yang Tianhui; and three others were on their way to Minghui School. When they passed a blooming oleander, five-year-old Tianhui suddenly caught sight of some Udumbara flowers and immediately told her mother. Ms. Wei looked where her daughter had pointed and made an exciting discovery--small white flowers sitting on top of oleander leaves.

When asked how she was able to recognize the flower, Ms. Wei answered, "I saw pictures of Udumbara flowers on the Internet. They have long stalks that look like silk threads, with a tiny white flower on top--that's how I could tell."

Udumbara flowers come into being in exceptional ways. This rare flower has so far been found on objects including Buddha statues, steel pipes, glass windows, leaves, and bricks. When the reporter arrived at around 9:00 a.m., he saw an oleander shrub about 160 feet from the intersection of Warm Spring Boulevard and Starlite Way. Buds resembling Udumbara flowers, which have been reported on the Internet, could be seen on two areas of the thick oleander leaves.

In the afternoon when the reporter returned with some friends, they found more blooming Udumbara flowers on another eight leaves.

Ten Udumbara flowers were first found blossoming on the face of a Bodhisattva statue in the Sumi Zen Temple in Korea in May 2005, and more sightings followed. The number of sightings has peaked in 2007. In June and July 2007, Udumbara flowers appeared in different parts of Taiwan. Locals flocked to the sites, as they regard the flowers as an "auspicious sign." The sight of Udumbara flowers at his home pleasantly surprised Taipei-based artist Chen Guodong. He said the flowers are whitish, shaped like little bells, with the fragrance of sandalwood. He exclaimed, "It's a miracle! They are so tiny, it's hard to detect them without a microscope, yet their fragrance fills the entire balcony." 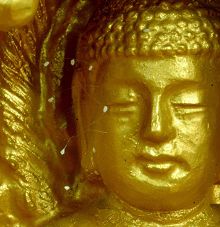 In May 2005, ten Udumbara flowers were found on the face of a Bodhisattva statue in the Sumi Zen Temple in Korea

A monk at the Sumi Temple said one could only comprehend the significance of the Udumbara from a religious and spiritual perspective.

According to Buddhist scriptures, "Udumbara" is a Sanskrit word, meaning "an auspicious flower from heaven." Volume 8 of the Huilin Phonetics and Interpretation, a Buddhist scripture, says: "Udumbara is the product of ominous and supernatural phenomena; it is a celestial flower and does not exist in the mundane world. If a Tathagata or King of the Golden Wheel appears in the human world, this flower will manifest due to their great virtue and blessings."

"King of the Golden Wheel appears in the human world" is interpreted as "Holy King Who Turns the Wheel, rectifying the Dharma in the world, for which the appearance of Udumbara blossoms is a sign."

(or The Great Perfection of Wisdom) Sutra says, "One cannot always keep the human body; wealth is but a dream; when nothing is lacking, it is difficult to persist in a righteous belief. When a Tathagata talks of the profound and wonderful Dharma, isn't it as precious and rare as the Udumbara?"
Category: Opinion & Perspective