Mr. Theo van Boven, former United Nations Special Rapporteur on Torture and an international human rights issue expert from Holland, said during a visit to Taiwan that China has signed the UN Convention against Torture, so it should stop the torture. Mr. van Boven pointed out that since China denies the allegation of harvesting organs, the Chinese Government should allow professionals to conduct investigations into this issue in China. 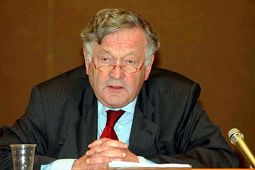 Mr. van Boven said during an interview in Taiwan that he received many materials about the persecution of Falun Gong when he was the UN Rapporteur. He has signed an open letter in Europe requiring the Chinese Communist Party (CCP) to open the gates for professionals to conduct investigations into organ harvesting in China.

Mr. van Boven said that although the CCP has been denying the existence of organ harvesting, there are many conflicts between their official statements and information from individuals. Mr. van Boven said that it is difficult to know the details about the organ harvesting, since investigations are not allowed by the CCP. He emphasized that professionals should be allowed to conduct independent investigations.

He pointed out that China has signed the UN Conventions Against Torture, a document that requires the signing governments to conduct unbiased investigations as soon as allegations of torture are brought up.

Seventy-three year-old Mr. van Boven has been concerned about human rights in China for a long time. When he was the UN Rapporteur, he mandated that investigations be conducted in China. Due to the Chinese government's refusals to cooperate, such investigations were never carried out. The current UN Rapporteur has gone to China, but due to all kinds of difficulties, he has only collected very little evidence.

Mr. van Boven said that the current rapporteur has made many good suggestions to improve human rights in China, but what is more important is to carry out these suggestions. International society should pay attention to the implementing of these suggestions in China.