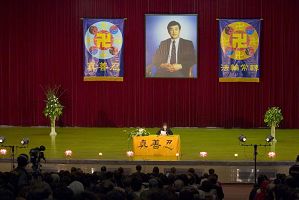 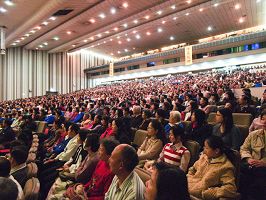 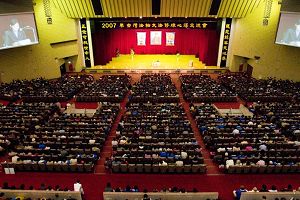 According to the trustee of the Falun Dafa Association in Taiwan, Prof. Chang Ching-his, Falun Dafa started spreading in Taiwan in 1995, and after July 1999, due to the persecution, more Taiwanese people learned about Falun Dafa, so the number of practitioners increased rapidly.

Prof. Chang estimated that there are about 600 thousand practitioners in Taiwan.

The conference started in the morning. The speakers included older people as well as a 9-year old child. They shared their experiences, including how to correct their wrong speech and behaviors in daily life based on the principle of "Truthfulness-Compassion-Forbearance," how to read the Fa and do the exercises well, and how to clarify the truth to Chinese people. Many people in the audience were touched to tears by the excellent experience sharing. 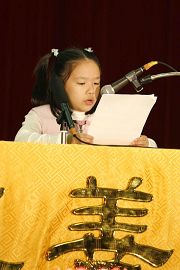 Nine-year old Ye Caiman says, "I want to be a qualified young practitioner." 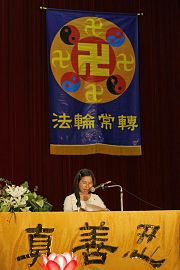 Nine-year-old Ye Caiman of Keelung has been practicing Falun Gong for five years. She started doing exercises and reading Hong Yin with her grandparents when she was four.

Ye Caiman likes reading the Fa and doing exercises. The first thing she does after school is read Hong Yin, and she has memorized all the poems in Hong Yin. She goes to exercise site to do the exercises twice a week in the winter time. Although she is young, she often goes out with her grandparents to pass out truth-clarifying materials. She also clarifies the truth to Chinese people through Internet. She said, "I want to be a qualified young practitioner." 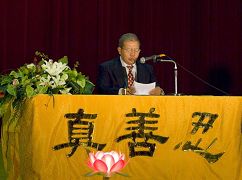 Mr. Huang Deyong, an employee at the Department of Health in Hualian County, said that he was an alcoholic seven years ago. Later, a coworker of his introduced Falun Dafa to him, and he started practicing. Soon, he quit drinking. His family saw his change and they support Dafa. His wife was touched by the big change of him and also started practicing Falun Gong. 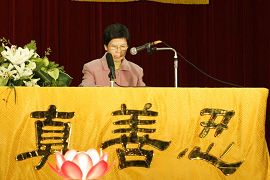 Sixty-seven year-old Ms. Dai Fanglan is a housewife from Taipei County. She said, "I and other older practitioners didn't know anything about the computer. We learned how to use it from scratch. I encountered many difficulties and thought about giving up. But I knew that many people would be saved if I could talk to them and clarify the truth through the Internet, so I forced myself to memorize the procedures. Now, I can operate a computer by myself, and I can even help other practitioners remove computer viruses."

A dozen practitioners from Japan attended the conference. Mr. Bei from Japan said, "Falun Dafa helped me to find the purpose of life. I attended group exercises in China before the persecution, but now the environment is ruined. It feels good attending the large-scale conference in Taiwan. I can tell that traditional Chinese culture, which is damaged in China, is conserved very well in Taiwan."

Mr. Peng Ronghsun is doctor. He had lung cancer two years ago. A friend of his gave him a copy of Zhuan Falun after he had surgery. He read the book and decided to practice Falun Gong. After two months of practicing, he was surprised to see that his white hair became black and his health was dramatically improved.

Mr. Fang Jinsan of Makung often does voluntary work at his community. He said, "I no longer seek comfort after I started practicing Falun Gong. When I have conflicts with others, I know how to look inward and not to blame others."

Many practitioners shared their experiences of clarifying the truth to Chinese people, which they consider a part of their cultivation.

Prof. Chang Ching-hsi said that the persecution of Falun Gong caused many people in the world to become aware of Falun Gong. More and more people recognize the evil nature of the Chinese Communist Party, although many people are still deceived by the fake economic development in China. Prof. Chang said, "As an economist, I can recognize big crises in the Chinese economy, and I can see that the CCP is about to crash. I hope that people can clearly see it and won't be deceived by it."