(Clearwisdom.net) Falun Gong practitioners in Malaysia erected a new billboard on January 15, 2006, beside the busy No. 2 Ring Road in Kuala Lumpur after the original one was maliciously defaced by someone with paint. Recently, interference happened again. However, after in-depth truth clarification, practitioners overcame the interference and the billboard continues to be on display. 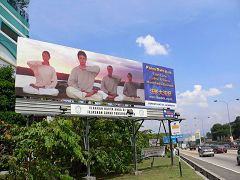 "Falun Dafa is Good" billboard displayed beside a busy highway

On June 8, 2006, several Chinese newspapers in Malaysia published a story that a representative from the Malaysian Chinese Association (MCA) held a press conference to openly oppose the Falun Dafa billboard, and that it would file complaint to the town council and the Ministries of Works and Home Affairs to have the billboard removed. Shortly afterward, the town council and advertisement company both received the complaint requesting the authorities to remove the billboard.

Facing this interference, practitioners tried many channels to clarify the truth. The city council in charge of billboard registration and permission consequently told practitioners that as long as we could prove that Falun Gong is a registered group in Malaysia, the council would not remove the billboard.

Malaysia practitioners have repeatedly requested to meet with MCA representatives and contacted the persons in charge. During these efforts, they clarified the truth to every individual they met.

The advertisement company eventually agreed to keep the billboard up until the contract ends.

A practitioner who has been involved in the case said that they obtained permission to display the billboard through proper procedures.

1. At the end of last year, the billboard was maliciously defaced. A practitioner once had a chance to chat with a staff member of the Embassy. The staff told him that the Embassy was very upset by the billboard and was unwilling to see it. When the practitioner asked for more details, the person didn’t dare to talk more.

2. In January, 2004, a giant Falun Dafa billboard beside a major road was removed. In Malaysia, it is a common practice that advertisement companies will go ahead to put up billboards once they obtain oral permission from a city government, and then wait for formal permission. It was the same case for practitioners’ billboard. However, the advertisement company was later ordered to remove the billboard.

3. In December, 2004, a Falun Dafa banner displayed in a district of Kuala Lumpur was removed without advance notification. Practitioners had followed all due procedures and the banner was on display for nearly one month. After the incident, practitioners clarified the truth to related officials and the city authorities eventually reinstated the permission for the banner.

Malaysia practitioners said that the billboard shows several practitioners in tranquil meditation and has a very good public impact. The repeated interference indicates that the CCP fears the spread of Falun Dafa and confirms the positive effects of the billboard.

They also call on leaders of the MCA to learn the truth about Falun Dafa and not believe the lies of the CCP and interfere with practitioners’ legitimate activities.