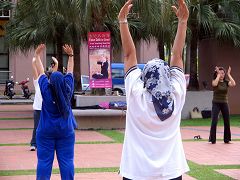 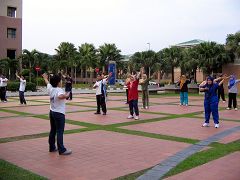 Practitioners told the government workers about Falun Gong and the persecution in China. To introduce the benefits of Falun Dafa, practitioners have been driving 40 kilometers from Kuala Lumpur every week. After a few months, many people became familiar with Falun Gong. They say "Ah, Falun Gong!" when they see Falun Gong flyers. Some of them are interested in learning Falun Gong.

At 6 pm on July 4, dozens of public servants gathered in front of their office building after work to learn Falun Gong. It was a peaceful atmosphere in the evening. After the exercise, they said they would like to do more. Falun Gong practitioners made an appointment with them to come back the following Tuesday.