Malaysia: "I Could Not Bear to See Such a Brutal Thing" (Photos) 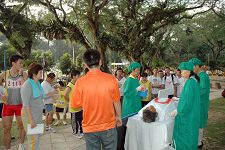 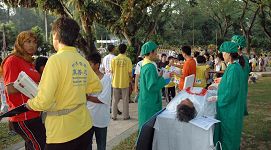 People are shocked by the CCP’s brutality.

Practitioners re-enacted the organ harvesting, and many people watched it. The practitioners clarified the truth to them and collected signatures to call upon international organizations to take action to stop the persecution.

Many people signed their names on the petition after learning the truth. One citizen also wanted to donate money to practitioners, which the practitioners politely declined. Some citizens asked for more materials for their friends. A 6-year-old boy learned the truth and asked his mother to sign her name to support Falun Gong practitioners.

A Chinese woman learned the truth and said that she could hardly bear to see such a brutal thing. Another Chinese woman also signed her name after learning the truth. She told practitioners that she had made a trip to China recently and saw how bad the Chinese people bully their fellows. She hopes that the persecution can be stopped as soon as possible, and that the Chinese people can live better lives.

Two Malaysian ladies wanted to support Falun Gong after learning the truth, but they were worried about whether signing the petition would cause them trouble with the authorities. The practitioners told them that signing their names to support the anti-persecution efforts is a good deed. Why would they have fear? Shouldn't those people who harvest organs from good people instead be frightened? It is the evil ones who are afraid of being exposed. These two Malaysian ladies agreed and signed their names. A gentleman, who was nearby listening to the practitioners, also signed his name.